With people’s minds clearly set on 2012, and this the final motoring edition of AERBT before the turn of the year, it seemed a good time to report on the major autumn motoring event of 2011.  Readers should note the dates for 2012 and be advised there are many other events on the Goodwood calendar and early booking for everything is advised.  The FESTIVAL of SPEED is 28 June-1 July and the Revival itself 14-16 September. 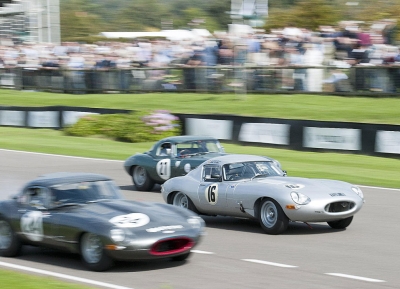 Over 138,000 motor sport enthusiasts and vintage fashion fans flocked to the 2011 Goodwood Revival (16-18 September) to join in the fun and celebrations at the world’s largest historic motor race meeting, which by common consent was deemed the best yet.

The Goodwood Revival is firmly established as a ‘must attend’ event, with visitors travelling from around the world.  The vast majority of the spectators came dressed in their finest 1940s, 1950s and 1960s fashions, with tweed jackets and pleated skirts aplenty in the early autumn sunshine, and occasional rain.

On the track a tribute to the legendary racing driver Juan Manuel Fangio – 100 years after this birth – saw a grid of rare and stunning cars associated with his career, including three spectacular Mercedes-Benz racers, plus two Chevrolets bought over from Argentina specifically for the Revival.  A handful of drivers who knew and raced with Fangio were also on hand.  Additionally, Goodwood staged its largest ever Revival vehicle parade with 100 British-built Fords lapping the circuit as this popular marque celebrated its centenary in the UK.

The 75th anniversary of the Spitfire aircraft was marked with a fitting and emotional tribute as 10 of these iconic machines took to the skies over Goodwood, with others on the ground, as Lord March paid tribute and the RAF Choir sang.  A daily parade of motocross riders from the golden 1950s-60s era of scrambling also delighted the Revival spectators, as did the dedicated motocross course built especially for the event at Lavant Corner.

The variety of racing machines and quality of motor racing was exceptional throughout the Revival weekend, with many nail-biting races and plenty of thrills – plus a few spills – along the way.  Racing highlights included Saturday’s Fordwater Trophy, which this year was awarded to the winner of the Jaguar E-type race to mark the 50th anniversary of this legendary sports car.  The 1964 semi-lightweight E-type of Jon Minshaw and Martin Stretton took the chequered flag. 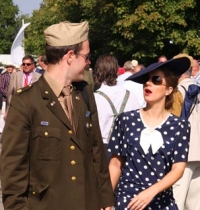 The thrilling St Mary’s Trophy for 1960s saloon cars saw Richard Shaw anchor a brilliant overall win with track victory in Sunday’s second instalment of this two-part race in the 1965 BMW 1800 TiSA.  Tom Kristensen and Kenny Brack took an emphatic win in the rain in the Royal Automobile Club Tourist Trophy Celebration race for GT cars aboard Daniela Ellerbrock’s Shelby Daytona Cobra.  Duncan Fitchett and Jeremy McWilliams may have finished only fourth in the second part of the Barry Sheene Memorial Trophy motorcycle race but they were always going to win overall on aggregate after a brilliant showing in the Part One Saturday race.

Some great vintage fashions included daily prizes being awarded to ‘best dressed’ male and female spectators, with finalists parading each afternoon on the Richmond Lawn car walk.  Ladies Day on Saturday saw a particularly high standard of period dress, and helped seal the unique, fun atmosphere of the 2011 Revival.

The recreation of a typical early 1960s British street scene, with a bus depot and High Street with a Tesco supermarket, clothes shops, the DeLonghi 2i coffee bar and period Kenwood kitchens proved to be hugely popular, with Revival shoppers coming over ‘all nostalgic’ at the sight of period packaging, household brands, live music and fashions that had long been forgotten.  The 1950s-style Butlins was also a huge hit as the famous British holiday camp celebrated its 75th anniversary.

The 1934 Hawker Fury Mk 1 was voted the Freddie March Spirit of Aviation pre-1966 aircraft concours d’elegance winner by a panel of distinguished judges, whilst a stunning dual-tone 1937 Bugatti Type 57SC Atalante – owned by William Ainscough – was the public’s choice for ‘the most beautiful car in the world’ in the Earls Court concours d’elegance out of 10,000 entries, with the 1961 Jaguar E-type roadster coming second.

The 2011 Goodwood Revival was clearly a huge success, with Revival-goers already talking with excitement and anticipation about next year’s event.

The 2012 Festival of Speed theme is ‘Young Guns – Born to Win’, celebrating drivers and riders and designers and engineers whose supreme talent and insatiable thirst for speed shocked the establishment, affording them immediate superstar status. 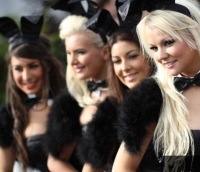 To mark the 50th anniversary since Carroll Shelby’s introduction of the initial versions of this cult Anglo-American sports car, the 2012 Revival will feature a grid exclusively made up of 30 Cobras and their derivatives.  This special all-Cobra race will be a 45-minute two-driver competition, with driver changes in the pits between 15 and 30 minutes. www.goodwood.co.uk