Economy Plus for United Airlines (or is it Continental?) 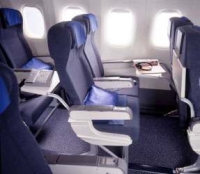 Continental Airlines should have virtually disappeared by now (see WTM report 14 October) but, for whatever reasons, owner United Airlines has announced the introduction of Continental Economy Plus.  It offers customers four inches of extra legroom in the forward rows of the Economy cabin.

The lead aircraft, a Boeing 767-400, went into service last week.  It also features new flat-bed seats in BusinessFirst and new touchscreen seat-back monitors in Economy.  In addition, the aircraft will be the first in the Continental fleet to feature the popular Channel 9 air traffic control communications.

“The merger of United and Continental is a unique opportunity to build an airline with leading products and services that customers value and are willing to pay for,’’ said Jim Compton, Executive Vice President and Chief Revenue Officer of United Continental Holdings.  “United’s customers who sit in Economy Plus consistently tell us they are more satisfied with their travel experiences, and we are excited to expand this option to more customers of the new United.’’

United itself introduced Economy Plus in 1999.  Today, the airline offers the extra legroom seating on all mainline aircraft and more than 150 larger United Express regional jets. www.united.com