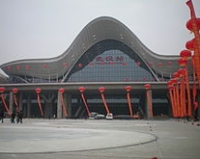 Situated at the crossroads of central China and at equal distance from Beijing, Shanghai and Guangzhou, Wuhan is a transportation hub for air, railway and ferry traffic. It is the fifth Chinese mainland destination to be linked to Paris.

Capital of the Hubei, with a population of 9 million inhabitants, Wuhan is a commercial centre for finance, industry (especially automotive), trade and science, with many international companies located there. The city is also an intellectual hub with scientific, technological and educational institutions such as Laser City and the Wuhan University.

The new service will be operated three times a with Boeing 777-200ER equipment, which can seat up to 309 passengers: 35 in Business, 24 in Premium Voyageur and 250 in the Voyageur/Economy cabin.