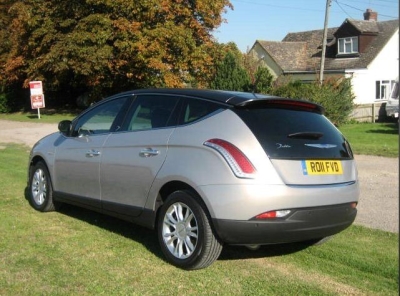 Earlier this year I parked alongside a Lancia Delta in sunny Spanish climes and remarked to my wife that I would be testing an example when we got home but it would be wearing a Chrysler badge as a result of the Fiat-Chrysler tie-up.

Depending on differing national markets, this already established 5-door medium sized hatch back will either be badged as a Lancia or a Chrysler.  In the UK it is the familiar American name and in addition to the winged Chrysler badge there are some cosmetic changes that, in my opinion, subdue the Italian character to a degree.

Notably the frontal styling reminds me of the iconic Chrysler PT Cruiser and initially I was a bit non-plussed about the trans-continental merging of two body styles though I found that the overall looks grew on me once I had viewed the car as an individual product rather than trying to do a positive dissection of the two characteristics, it is simply better to treat this car as a new product as will be the general case of other offerings resulting in this marriage of the marques.

I would suggest that the Delta is an alternative to a Volkswagen Golf, Ford Focus and Peugeot 308 though it is clearly a more individualistic product that I suggest steers clear of the mainstream competition by offering sleeky looks allied to a generous size, competitive general performance allied to easy driving rather than a sporting touch of a traditional Lancia.

Chrysler has clearly gained by the development of the Delta as it has had access to Fiat’s advanced technology in the form of the Multiair (petrol) and Multijet (diesel) compact power units.  Thus there is a choice of four engines ranging in output from 118 to 162 bhp, a regular 6-speed manual gearbox plus a robotised 6-speed manual on the mid-power 120 bhp petrol unit.  A conventional automatic is not offered.

The emphasis has obviously been on providing a well packaged product based on four specifications – S, SE, SR and Limited rather than muddying the waters with long lists of options.

I have concentrated this first encounter with this Italianate/American on what is expected to be the bigger selling SE version powered by the 1.4-litre Multiair turbo petrol engine which is a lively performer without the excessive power surges that was common with earlier turbo petrol units.  It delivers an impressive 138 bhp with smoothness, flexibility and passable noise levels to provide good mid-speed pick-up, acceleration to 60 mph from rest in just under 10 seconds and a claimed, top speed of 126 mph achieved in fifth and 6 sixth gears.

Fuel consumption, considering the body size/engine capacity is commendable, expect and above 40 mpg figure with sage employment of the Stop+Start system though this can drop somewhat if you push too hard while an emissions figure of 132 g/km is above average.

At the wheel it is a relaxed situation, the gearbox was just starting to loosen up on the low mileage test car though it was indicative of an easy change action and a good spread of ratios, the brakes are smooth and progressive with good pedal feel, the Dualdrive electric power steering system is light and responsive though the strong return action takes time to accept.

The comfort aspect is that of a roomy 5-seater with a few reservations.  For example the driving position is fairly good despite not having reach adjustment of the steering wheel and shallow cushions, and the sliding rear seats allow for longer limbed occupants though the rakish rear roofline might prove a bit of a pain in the neck.

Without doubt the interior presentation gets close to that of a small luxury product, a smart and well stocked and soft touch finished fascia (though can suffer from irritating glare under certain conditions), privacy glass, leather finished steering wheel, remote/keyless entry, quality media/audio systems, electric release for the reasonably proportioned luggage area and the powered panoramic sunroof.

Other plus factors included powered/heated/folding door mirrors, dusk till dawn lights, extensive use of LED lighting, a refrigerated front oddments compartment (for chilled drinks or medications?) and a comprehensive trip computer system.

Alloy wheels but no spare, six airbags and a top 5-star NCAP (safety rating, a choice of good quality trim and fittings, fairly well made but not bench-mark class – that’s the Chrysler Delta, a logical Euro-sized offering that should attract a very varied customer profile.  A product that looks forward rather than backward.

Jaguar must take pride of place in any monthly review of motoring events and the announcement that it intends to recruit 3,000 staff for its Solihull plant and indicated big plans for the future.  Among a host of models possible is a true sports car and a small saloon in 2013.  The engine plant is already on its way. www.jaguar.com

CHEVROLET: Having just celebrated 100 years of car production, Chevrolet is currently running a pre-Christmas sale with price reductions on Spark, Cruze and Captiva. Biggest price slash is up to £6,000 on the Captiva. But hurry, deal ends on 30 November. www.chevrolet.co.uk

HYUNDAI: The new Hyundai has been given a bench-mark 5-Star Euro NCAP rating – 96% for adult protection, 86% for child protection.  It is the sixth consecutive Hyundai model to achieve a 5-star rating. www.hyundai-car.co.uk

MAZDA: Digital servicing through franchised dealerships is claimed, by Mazda, to add at least £1,500 to the value of used Mazda models. The car maker claims that its digital service record system is a safeguard against falsified service records. www.mazda.co.uk

TYRES: The West Country based Dainton Group Services Ltd is offering free wheel/tyre storage by providing a container at each of their eight depots available for motorists fitting winter tyres.  Boss Duncan Dainton hopes the move will spur other self-storage operators around the UK to offer similar facilities. www.dainton.com

VOLKSWAGEN: Hard  on the heels of Green Awards from What Car? and Auto Express magazines, comes the ACFO Green Vehicle of the Year Award to the Volkkswagen 1.6 Blue Motion model.  It is reported to emit a mere 99 g/km. www.volkswagen.co.uk