iPads are in with British Airways 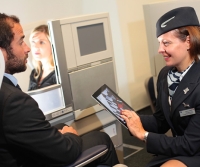 British Airways customers around the world will benefit from a new level of customer service thanks to thousands of iPads being issued to the airline’s senior cabin crew from next week.  The move comes after a highly successful trial, involving 100 senior crew members, who are responsible for delivering service to customers onboard the airline’s 226 aircraft and reported by AERBT 22 August.

Specially developed software and apps enable cabin crew to tap into data giving them customer preferences and their previous travel arrangements, allowing them to offer a uniquely personalised service.

The three-month-long trial has been judged such a fly away success that British Airways has given the go-ahead for the specially equipped iPad 2 to be issued to 2,000 senior cabin crew across the entire British Airways long and short haul fleet.

Bill Francis, British Airways Head of Inflight Customer Experience, said: “The benefit of the iPads has been felt right from the beginning, with fantastic feedback from both customers and cabin crew alike.”  One particular benefit is destination guides.  Passengers often ask the cabin crew on points regarding destinations.  Answers can now be given with confidence. www.ba.com