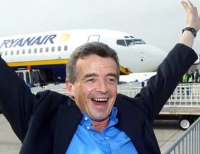 “I would like to grow to 120m, 130m passengers,” said Mr O’Leary.  In 2010-11, 72.1m passengers flew with Ryanair.  Mr O’Leary insisted he would only buy aircraft at “cheap prices”, but with full order books neither Airbus nor Boeing are likely to be in the mood for a discount deal and would also have delivery problems.  Most industry experts believe that ordering the new Chinese C919 ‘paper aircraft’ very risky.

Ryanair has an all-Boeing fleet, and Mr O’Leary acknowledged it faced increased operating costs if it bought aircraft from a different manufacturer.

Ryanair’s expansion in recent years has focused on Italy and Spain, and Mr O’Leary said the airline now had big growth opportunities in Scandinavia and eastern Europe.

Ryanair paid a maiden dividend worth €500m last year, and is considering a similar payment to shareholders in 2012-13.  A third special dividend might be possible in 2014-15 according to O’Leary if Ryanair had not finalised an aircraft order by then, but he ruled out the company making an annual pay-out to shareholders. www.ryanair.com