ON TOUR: “To Fly to Serve” A new spirit at British Airways 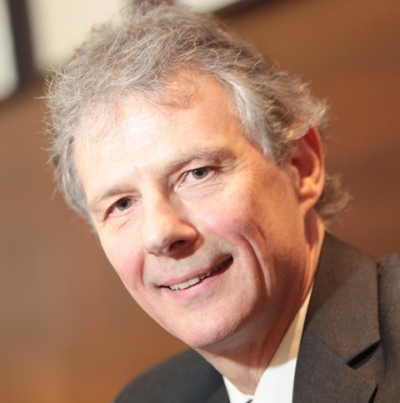 When the Chief Executive of a major UK company takes time to come to a reception and welcome a visiting journalist you suddenly realise that the man means business.  The occasion was last week and the place BA’s impressive headquarters at Waterside, a short distance from Heathrow Terminal 5.  The welcome by Keith Williams was warm.  On entering the building a certain buzz filled the place.  There is a new spirit at British Airways. “To Fly to Serve” was the airline’s historic motto.  It is back.

This coming January, 13 years ago, a younger Keith Williams (now 55) joined BA.  He now claims to be the first person taken on specifically to work at the then brand new headquarters.

Keith was heavily involved in restructuring the airline’s finances after the aviation slump that followed the terrorist attacks of 9/11 and in the plans that brought the company back to profitability.  Prior to his current position he was Financial Director since 2005.  His CV includes a First at Liverpool University and spells at Apple, Arthur Anderson and Boots Plc.  And he supports West Ham United football club!

Williams has now been in charge for 12 months, going about the job “his way”, quietly settling the long-running cabin staff dispute, and setting the airline on a new course.  Under the banner of IAG individual company profits are not divulged, the half-year results until June showing an operating profit of £34m on increased revenues up 17.9%.  No big deal, but at least in the right direction.

If British Airways does not quite “fly the flag” these days for many around the world it still symbolises what is the best from the United Kingdom.  Enter a BA plane no matter where it is anywhere on the globe and you suddenly feel at home, even safe.  And you don’t have to be British to get this sensation.  That has to be the logic of a new advertising campaign very much based on nostalgia.

BA has been in some difficult times over the last few years but now is seemingly on the road to recovery, albeit faced with real problems with a world economy that is causing concern.  High fuel prices is another major difficulty.  Finally, the airline has to deal with a Government which has failed so far to appreciate the value of air transport to the British economy.  The appointment of Justine Greening as Transport Secretary just as we all were beginning to appreciate Philip Hammond is far far too early to judge.  On the face of it the placement seems strange.  But she does live in the Heathrow noise zone and was against the third runway!

So where does BA go from here?  In very simple terms it will invest £5bn in new aircraft and upgrades over the next five years.  Having purchased six sets of slots from Lufthansa it now hold 43% of Heathrow movements, still much less than Lufthansa at Frankfurt and Air France/KLM at Charles de Gaulle.  These will be effective from the start of this year’s winter season.  Whilst Williams will give nothing away regarding how they will be used early indications are that initially there will be an expansion of short haul routes.  Loss making bmi now has about 8% of Heathrow slots but what happens for the future lies very much in the hands of its German owners.  Will they sacrifice their position in what is still the world’s number one international airport for possible short-term financial gain?  The airline is for sale but are they serious or just testing the waters?

Williams is adamant that British Airways wants to retain its identity and style in collaboration with sister company Iberia and its US partner American Airlines.  Under the code share arrangements passengers can clearly see which carrier they are booking and the fare.  On Heathrow – Madrid for Business Class flyers it is choice of English or Spanish style meals, BA or Iberia.  However at the back end BA offers free Economy catering, whilst if you are on Iberia everything is chargeable.  Likewise on the North Atlantic the styles of the partner airlines are different.

Asked about diverting passengers to and from South America to Madrid, Mr Williams pointed out that Iberia was the largest carrier across the South Atlantic but BA in recent times has reintroduced non-stop services to Buenos Aires and Rio de Janeiro enabling a capacity increase to Sao Paulo.  Bogotá, Caracas, Lima and Santiago may have to wait but when flown these were a left over from British Caledonian.  Asked about China he says that the three current gateways, Beijing, Hong Kong and Shanghai are working well, inbound traffic inhibited by passport problems.  Another aviation/economy problem for the Government to sort out.

At the present time BA has a fleet of 236 aircraft with a very interesting forward order book.  From 2013 onwards both Airbus A380 (12) and 787 (24) arrive.  BA has not confirmed its specifications for the A380 and is certainly watching what others are doing.  Maybe we are in for a surprise.

BA currently has 46 Boeing 777-200s.  Williams confirmed that 18 of the older ones, which have a different IFE system, will be stripped down and refitted with new cabins and the latest IFE system in the next 18 months.  Already proving very popular, the airline has taken delivery of three of the Dash 300 extended range version.  There will be another three to arrive between the end of this month and February. These are all four-class and seat 298 people.

British Airways Boeing 747s are between 14 and 18 years old, 25 years often given as the life of an aircraft.  The airline has 55 in the fleet of which 51 are flying at the moment and four are in desert storage.  Only the First Class is being upgraded.

From December, 14 (out of 21) Boeing 767s used on medium and long haul routes will be the subject of a “deep” cabin transformation, to the same standard as other mainline aircraft, including flat beds and the latest IFE.  Experience with other carriers indicates that when done properly the upgrade transforms the venerable Boeings and gives them a very useful life extension.  At up to six weeks per aircraft the process will be undertaken in a quick 18 months.

Asked about Gatwick, Williams sees a bright (BA) future for the airport noting the £73m high tech “home” that has now opened.  The airport currently provides 45 domestic, European and long haul destinations.  The airport itself is active in developing three Airbus A380 two-tier stands.  He also seems keen on London City and says that announcements will be made shortly concerning its French subsidiary Open Skies, which has dropped its Washington route from Orly.

The era of cost cutting and stripping out some of the frills seems to be at an end, even with a financial man in charge.  A recent short haul trip to Edinburgh was operated by a keen young cabin crew with a very informative flight deck giving something of a running commentary.  The Edinburgh Galleries lounge felt fresh, was most welcoming, and even labelled the sandwiches.

British Airways has launched its biggest brand advertising promotion for a decade to coincide with the five-year programme.  Up to £20m has been set aside for the campaign, not a trivial sum in these harsh times.

The advertisements, on TV, in newspapers and online, showcases the airline’s heritage and highlights the characteristics that make British Airways special: decades of flying know-how, thoughtful service and British style.

“The motto ‘To Fly. To Serve’ is part of the DNA of British Airways,” said Mr Williams.  “It is on our coat of arms, and it is worn in crew uniforms.  And it has real meaning and resonance for today.  It encapsulates our expertise for flying and our commitment to customer service.  It describes our purpose.”

Williams epitomises this strategy.  He has been around the airline for more than a decade, through good times and bad and is in for the long haul.  The last two BA chief s have been short term and parachuted in.  He is probably not as easy going as he appears.  The future looks good for BA.