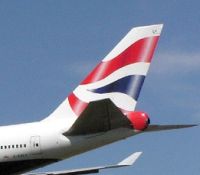 BRITISH AIRWAYS has reported a record loss before tax of UKP410m for the year ended 31 March 2009.  The airline will not pay a dividend and in a subsequent statement Chief Executive Willie Walsh and Finance Director Keith Williams have decided to symbolically work for no pay in the month of July.  Next winter the airline will park up to 16 aircraft and no mention was made of the new first class product promised for earlier this year.  In a long and detailed statement Mr Walsh said that all 57 of the airline's Boeing 747s and 33 of the 43 Boeing 777s are fitted with the new Club World cabin with completion of the balance due by the end of 2009.  The statement also expressed concern over the airline's pension fund position, a liability of UKP3bn being suggested by experts in this area.  Also see Extra Comment.