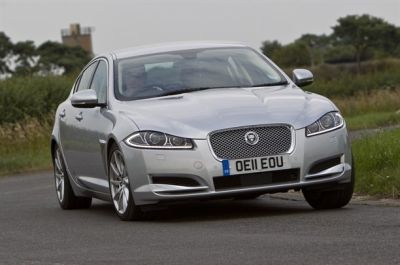 Grace, Space, Pace...for years this trio of words have been associated with successive Jaguar models and judging by the appearance of the just extensively revamped Jaguar XF saloon range they remain justifiable to a great degree even in today’s hotly contested premium class.

This svelte machine has been gracing the highways for the past four years, winning up to 10,000 annual sales but Jaguar expect that its latest efforts will see an almost doubling to hit 18,000 units in a full year.

Obviously those extra customers have to come from somewhere, either the newly upwardly mobile or by prising them away from rival products.  To this end Jaguar has subtly reworked the body styling by the use of a more curvaceous bonnet, a slightly more prominent grille, new headlights, redesigned side vents in the front wings, new LED rear lights and chrome window trim.

Clearly Jaguar sticks to the wisdom of not trying to mend something that is not broke.  To a great degree it has left the well appointed interior virtually untouched though there is evidence of some better quality materials and an improved screen for the satellite navigation system which also links across its directions to a new panel in front of the driver.

It is under the bonnet that the main work has been undertaken in the form of a new 2.2-litre four-cylinder turbo diesel engine to augment the existing 3.0-litre V6 turbo diesel model.

Developed from a proven Land Rover unit to produce an appropriate 187 bhp in a very refined manner and a relaxed 3,500 rpm, this unit is complemented by a new 8-speed selectable automatic transmission that is also applied to the 3.0-litre version.

Having experienced both diesel power units I found that this new smaller unit actually provided a touch more driver entertainment, notably when driven in the Sport mode.  I also experienced a slightly lighter feel (though very positive) to the steering action compared with the V6 version.

The gear range, which can be controlled if desired by the small paddles behind the steering wheel, ideally suits the power output under all driving circumstance – fast acceleration or relaxed cruising, this one delivers with aplomb.

From the driving aspect if you are looking for the quality and character synonymous with bye-gone Jaguars then there is plenty of that DNA shining though with this one.  Those who said the X-Type was not a true Jaguar when it came to that feel good factor can eat their words.  This is a car that drivers have to be prised out of!

Pace: According to Jaguar this ‘cat’ is kept on a leash, limited to a mere 140 mph though slip that leash and it will hit 60 mph from rest in just 8 seconds.  That is really shifting for a car of this size/weight!  And no longer are Jaguars thirsty beasts, this one has a combined fuel consumption figure of 52.3 mpg (aided by the latest Start+Stop technology) so even the heavy footed well heeled driver should get away with around 40 mpg.

Perhaps a carbon footprint of 49 g/km is behind the class.

Space:  The near luxury interior is certainly spacious and very comfortable, rear seat accommodation proved more spacious to me than some contemporary tests suggested while boot capacity, not always generous on some earlier Jaguars, is good at around 550 litres and is augmented by folding seat backs. Luggage retaining metal loops also feature.

Grace: Sit inside the XF and you feel that you have arrived at a very special stage in life.  The interior reflects the best in British workmanship and taste.  Choose the type of highly polished veneer trim, enjoy the leather seating and trim, soak up the stylish interior presentation.  This is the situation that invariably wins sales and also, as history proves, starts a love affair with the marquee.

Jaguar has also moved with the times, the driver’s workstation is both businesslike and good on the eye and is right up to date. I particularly enjoyed the retractable gear selection turret located on the transmission tunnel.

Comparing prices with the opposition this Jaguar may appear expensive and one needs to take into consideration that Jaguar has adopted an off the peg (albeit a very good one) marketing strategy with a lot of the kit standard whereas it is optional on some rivals.  It does not sell you short though my test car had over £4,000 worth of options including a heated steering wheel and a blind spot monitor.

Your Editor is the proud owner of a 2.7ltr (now 3ltr) very early XF diesel and is delighted with it, particularly the superb ride, smooth gear change and unique push button gearbox arrangement.  If he has a grumble it is the paddle gear change on the steering wheel.  It can be tricky on a roundabout. 45 mpg on the new 2.2 should be obtainable.  He has an order in for the new baby Jaguar salon when it arrives sometime in 2013.  Madam wholeheartedly concurs.  You feel that you have arrived at a very special stage in life, and when we tested the competition before purchasing there was no contest.

BMW has marked a significant milestone in its history to coincide with the September registration plate change.  It has now surpassed the two millionth car mark in the UK, a little over 31 years after BMW UK Ltd sold its first vehicle.  The first car sold on 1 January 1980 was an E12 5 Series Saloon.  Move forward 1,999,999 cars later and the owner of a BMW 5 Series Gran Turismo has taken delivery of his significant BMW car. www.bmw.co.uk

JAGUAR LAND ROVER has recorded a 26% increase in global retail sales for September 2011 with China delivering another record month with sales up 157% for Jaguar and 85% for Land Rover.  This record performance has been driven by sales of the XJ following the introduction of the 3.0l engine and a continuing strong performance from all Land Rover models. www.jaguar.com

The SMMT (Society of Motor Manufacturers and Traders) has released figures for the September plate-change showing that 332,476 new cars were registered, 0.8% below the figure for 2010.  This means that third quarter three volumes are down just 0.7%, with January to September volumes down 5% on a year ago.  Growth in fleet volumes supported the market while private registrations were down 9.3% and the SMMT expects the full year new car market to end 5.3% below 2010 levels at 1.92 million units.  The average new car CO2 emissions fell by 4% to 138.5g/km, largely because diesel cars are accounting for a growing share of the total market, with 49.9% of the market, up from 44.5% a year ago and alternatively-fuelled car registrations also rising to 1.3% market share after a 9.1% rise in volumes. www.smmt.uk

VAUXHALL: A5-Star NCAP safety rating has been gained by the Vauxhall/Opel Ampera electric hatch back model.  It is claimed to be the first car to gain a maximum rating for side impact protection.  Range is claimed to be up to 300 miles, UK sales start next spring. www.vauxhall.co.uk