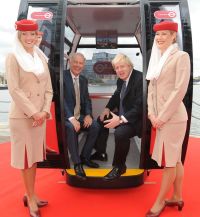 Emirates is the sponsor for the new cable car across the Thames linking the Greenwich Peninsula and the Royal Docks.  To be known as the Emirates Air Line, and worth £36m in a 10-year deal, the system should be up and running well before the start of next year's London Olympics.

With a capacity to carry up to 2,500 people per hour in each direction in the peak, equivalent to the capacity of 30 buses per hour, it is anticipated the Emirates Air Line will transport two million passengers per year.

Creating a direct link between the O2, Europe’s biggest entertainment venue, and ExCeL, the UK’s largest exhibition centre, the Emirates Air Line will also provide an additional interchange between the DLR and Jubilee line.

The Mayor of London Boris Johnson was joined by Tim Clark, President, Emirates Airline to announce the sponsorship deal.  The Emirates Air Line will feature on the iconic Tube map and be included in Transport for London's (TfL) travel information.  As title sponsor, Emirates will receive a range of naming and branding rights, including the right to name the scheme, its stations and the creation of a joint logo. www.emirates.com www.tfl.gov.uk