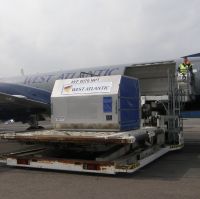 Atlantic Airlines, part of the West Atlantic Group, Europe's largest regional specialist cargo airline, has re-introduced scheduled freight operations at Coventry Airport after a gap of nearly two years.  For the immediate future West Atlantic will base two BAe ATP turboprops at the airport serving Dublin, Lille and Maastricht.  Discussions are thought to be taking place regarding scheduled passenger services too.

In December 2009 the airport ceased operations after a High Court hearing, however the lease was acquired by Sir Peter Rigby's Patriot Aviation Group on 28 April 2010.

West Atlantic was created in 2008 through the merger of two of Europe's most established independent cargo airlines, Coventry-based Atlantic Airlines, and West Air Sweden.  Now employing over 450 staff, and with a fleet in excess of 50 aircraft, Coventry Airport serves as the airline's operational headquarters and is a major engineering base. www.westatlantic.eu