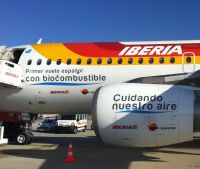 Iberia has become the latest airline to experiment with biofuel, working together with Repsol the global energy company.  The airline has flown a commercial flight by Airbus A320 from Madrid to Barcelona which burned some 2,800 kg of a mixture of 75% conventional A-1 jet fuel and 25% biofuel derived from the camelina sativa plant.  The use of the mixture brought a reduction of nearly 1,500 kg of C02 emissions.

The second-generation biofuels is a mixture made by ASA of synthesized paraffin bio-kerosene produced by Honeywell-UOP and evaluated and certified by Repsol at its technological centre, which allows an almost 20% reduction in emissions of greenhouse gases.

Camelina sativa is an inedible oil plant that grows widely and can be cultivated in Spain.  Unlike other plants used for biofuels, camelina enriches the soil in which it is grown.

Iberia is the latest airline to pursue biofuel development in a bid to reduce emissions and dependency on (very expensive) oil based fuels.  These include Thomson Airways in the UK, Air France-KLM, Finnair and Lufthansa.  British Airways is developing a synthetic fuel plant not far from London City Airport. www.repsol.com www.iberia.com