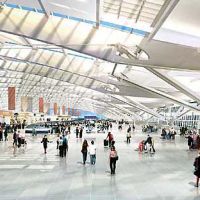 BAA has said it is applying to the Competition Appeal Tribunal to review the order by the Competition Commission made two months ago forcing it to sell three of its seven UK airports within two years.  It is being seen as delaying tactics by a number of airlines, Gatwick actually put up for sale before the Commission reported.  The underlying economic situation has without doubt reduced the value of the airports.  Initially two bids are thought to have been considered at between UKP1.3bn and UKP1.4bn, well below the level originally sought by the airport’s owner Spanish group Ferrovial.  BAA has also now complained that Professor Peter Moizer, a member of the review panel, had an interest as an adviser to Greater Manchester Pension Fund, a partner with Borealis the Canadian infrastructure fund in one of the groups.  Moizer says he resigned prior to his Competition Commission appointment.  The other party was Global Infrastructure Partners (GE and Credit Suisse), the owner of London City Airport, but even this bid is open to doubt as its validity has expired.  The uncertainty of the position could re-open interest from parties fallen by the wayside. www.baa.com