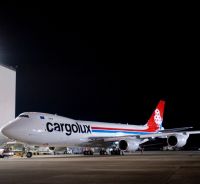 Boeing, which should this week be warming up to the ceremonial handover and first delivery of the 787 Dreamliner to ANA next weekend, is now facing up to problems regarding Cargolux receiving its first 747-8 Freighter which was due today (19 September).  This has been cancelled, the plane manufacture citing "unresolved issues" with the airline.

Boeing spokesman Jim Proulx said the company was working with Cargolux to resolve the issues.  He declined to say how the snag would affect the 747-8F delivery schedule, with a second aircraft due imminently.

Based in Luxembourg Cargolux is currently a dedicated 747 operator.  Earlier this month 35% of the company was acquired by Qatar Airways and it is known that a meeting of the newly reconstituted board took place last week which clearly made the decision not to take the aircraft citing "unresolved contractual issues".  There have been issues over the performance of the aircraft's GEnx engines but these were believed to have been resolved.  The situation is an embarrassment for Boeing but the 747-F remains the only true option as a large specialist freight aircraft.  It is fully FAA certificated. www.boeing.com/commercial www.skyscanner.net