ON TOUR: Where is La Rioja? 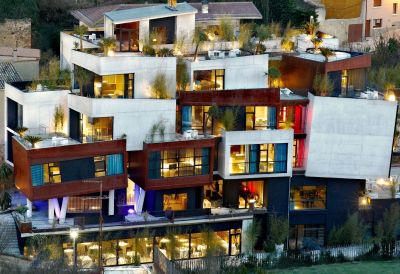 The region of Rioja, in North East Spain and south of Bilbao, is renowned for its long heritage of wine production which began when the Roman’s introduced the vines back in the first century.  However, a quiet revolution has recently taken place as modern architectural structures featuring striking designs have become as prevalent and potent as the region’s full bodied reds.  Canadian architect Frank O. Gehry put Rioja on the map with his sophisticated design at the Marqués de Riscal Bodega.  Others have added to the landscape with elite Valencian architect Santiago Calatrava Valls designing the beguiling Ysios which, with its undulating structure, reflects its Cantabrian mountain range backdrop; J. Marino Pascual’s Bodega Antion replicates a carefully balanced set of children’s building blocks.

Hotel Viura, located in the medieval village of Villabuena, population 300, (vineyards 43!) epitomises the pattern of constructing elaborate edifices that should radically conflict with the surroundings.  Yet careful design, attention to detail and considered thought ensure the avant-garde properties of Rioja actually complement and add to the beauty of the local scenery.   From Bilbao’s airport it is around 70 picturesque twisty miles.  Depending on your driving about 90 minutes. 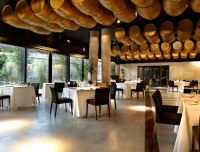 Opened in Spring 2010, Hotel Viura has quickly become one of the region’s iconic boutique hotels.  Designed by a young woman from the diminutive village, the impossible building which blends industrial techniques with style and comfort, consists of seemingly precariously balanced cubes bursting animatedly from the ground.  On careful viewing much is actually optical illusion with carefully angled window frames, columns and supports belying the solid structure beneath. Each of the 26 rooms and seven suites have an individual identity but feature a collection of style elements most down-town Manhattan hotels would be proud of.  Coloured glass partitions, polished concrete, refurbished industrial wood all combine to create comfortable, bright and airy rooms.  Seemingly randomly scribbled chalk numbers indicate the rooms, and idly doodled chalk images entice you to get up close and personal with the industrial design.

The restaurant’s barrel ceiling leaves nobody in doubt about the regional location and as Pedro, the Maitre D, leads guests through the extensive restaurant wine list the call of the vines can be heard.  Haro is the central focus of the region’s wine production.  This focal centre is home to the traditional Compañía Vinícola del Norte de Espaná, or CUNE as it is better known, owned by the Asua family since its inception in 1879.  It is the byword for innovation in wine production and responsible for producing the rich reds such as Imperial Gran Reserva, Cune Reserva and the more coiffable white Monopol which is the oldest white wine of the region and made from 100% Viura (after which the hotel is named). 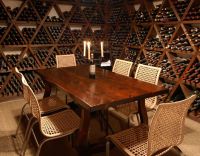 Cune produces a mammoth 9 million bottles of wine per year and is listed on the Spanish Stock Exchange.  It has always been at the forefront of wine production and first demonstrated its radical approach by employing the architectural office of Alexandre Gustave-Eiffel, just 20 years after opening, to design a new type of wine cellar.  A form of structural support consisting of metallic trusses extending from wall to wall negated the need for columns in the vast barrel room.  This created a more cost efficient space in which to store, rack, maintain and supervise the wine barrels.  Later in 1941 CUNE became the first vineyard to use epoxy lined concrete vats in which to store its wine, a technique which was quickly adopted, then abandoned for stainless steel.  However the concrete vaults are now undergoing a renaissance across the region as the qualities of high neutrality and stable temperatures produce a superb wine making environment. 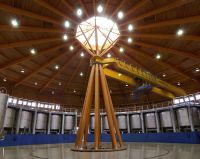 Five generations later the Asua family continues to innovate and the latest addition to their radical wine production has been the construction of the Viña Real vineyard where 3m of the Cune's bottles are produced annually.  In contrast to the traditional hacienda style of Cune Viña Real’s architect Phillippe Mazières, who also designed the winged structure of Bilbao airport, has created both a beautiful and functional homage to wine production.  The unusually light main building is inspired by the  allegory of the wine making process.  Mazières took the key ingredients of wine production – wood, glass, stainless steel and concrete – and created a monolithic structure that represents an oak wine vat, but made of red cedar wood.  The cylindrical two-storey structure, which is supported by an a frame of lengthy pine wood columns, creates wine through an intriguing gravitational method which sees the grape always journeying downwards through the process.  The main “vat” building is then linked to two tunnels bored deep into the hill by the machines responsible for the Bilbao subway, and it is here in these enormous underground caverns that the wine finishes fermenting.

Perhaps the Asua’s most creative, but maddest moment can be witnessed at the CUNE vineyard.  Any visitor should ask for a tour of the “cemetery”.  Behind a gothic ironwork gate the Asua’s laid down a selection of their finest wines produced from 1879 onwards agreeing to only drink the wines 100 years later.  For obvious reasons this has not happened and a trip to the graveyard of wines leads you into arched vaults leeching mould of many varieties.  The wines have not been touched for decades, yet it is fascinating to learn that even now some of these wines could still be palatable 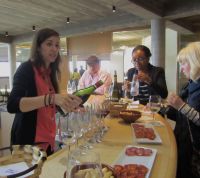 It is said that 1964 is the harvest of the century in Rioja, closely followed by 2001 so for any serious investor look out for the illusive Imperial Gran Reserva 1964, but you will need to be quick.  The economic crisis has driven much domestic tourism and the Spanish enjoy drinking their own wine.  For those that come from further afield Alava Incoming specialise in arranging cultural, gastronomic and tourist itineraries in the province.  Vineyard tours can be as simple as a tour and tasting for €8, or include a full five-course Spanish meal, with of course accompanying wines for around €35.  Harvest time, when the burnt umbers, brilliant reds and ochre yellows of the vine leaves paint a pallet on the landscape, is the best season to visit.  Alava can arrange for budding oenologists to become part of the harvest workforce.

Reservations are essential because, as our guide told us, some of the vineyards which were initially sceptical about wine tasting and tours, now make more money from the visits than wine production.  Reflecting on the visit the following ditty comes to mind, “Oh mother I grow weary, my mouth is very dry, take me to a winery, and leave me there to die….”