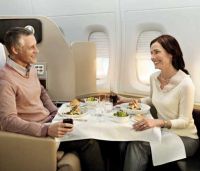 With British Airways seriously revising its operation to Australia (see AERBT 29 August),  oneworld partner Qantas has reorganized its services to ‘Down Under’ focussing on Singapore as the direct gateway to Oz.

From the start of the 2012 summer season at the end of March the airline will operate two of its much praised A380 services daily from Heathrow non-stop to Singapore, one aircraft going on to Sydney and the other to Melbourne.  QF limits its A380s to only 450 passengers with Business Class and Premium Economy on the upper deck and First Class plus Economy on the main deck.  Currently there are ten A380s in service with another two to be added by the end of the year.

For onward daily travel from Changi to Perth, Adelaide (three times weekly) and Brisbane two-class Airbus A330s are provided.  If Darwin or Cairns is your final destination Qantas Jetstar provides the service, once again an Airbus A330 but the premium class is called StarClass and whilst spacious it is not the lie-flat seating provided on Qantas international services.  Qantas run the oneworld lounge at Singapore, which is being upgraded and includes showers, very useful to unwind on a long haul flight. www.qantas.com