SkyWork Airlines to Rome and Vienna 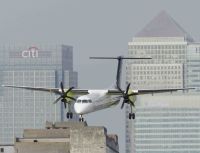 Based at the Swiss capital of Bern, SkyWork Airlines, an independently-owned regional carrier, has introduced flights to Rome and Vienna.  At the same time and just five months after its debut, the airline has upped frequencies from London City to Bern from six to 11 flights weekly.

With these new additions, SkyWork now links the Swiss capital to a total of ten destinations.  A further four – including Amsterdam, Belgrade, Budapest and Madrid – come on line at the end of October.

SkyWork was founded in 1983 initially specialising in ad-hoc, business and charter operations.  Its fleet now comprises of two Dornier 328 and two Bombardier Q400s.  Three additional aircraft – two 328s and one Q400 will be added in 2012. www.flyskywork.com