It’s even quieter than you think 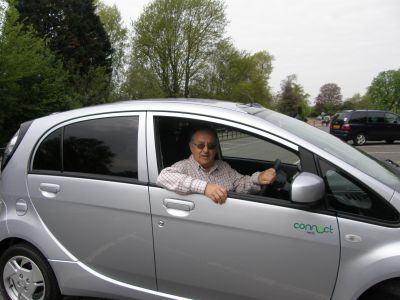 Electric cars are all the vogue, or are they?  When AERBT’s Editor in Chief was offered the opportunity to test drive a Mitsubishi i MiEV (which stands for Mitsubishi innovative Electric Vehicle) he jumped at the chance.  Our regular motoring expert,Ted Wilkinson of the Guild of Motoring Writers, will have to wait with his new Peugeot 508 contribution until next month.

Readers may recall a short impression of the vehicle when Hertz recently demonstrated the Mitsubishi and also the Nissan Leaf at their Marble Arch depot in central London.

And that is the problem with the fascinating Mitsubishi.  It really is great for getting around London, or any other big city, but its limited range (something less than 100 miles) prohibits use for any distance travelling although it is an excellent, and silent,  Motorway operator at the 70mph legal limit.  Just like any other car the harder you push it the lesser the range.  When that is limited in any event the problems start to mount.

The initial acceleration is outstanding, ideal for city travelling.  However topping up the car is not easy, even if a (usually free) power point can be found.  Overnight at home in a garage it works well but leave the car for just a couple of hours with a standard plug and the battery indicator still indicates a problem.  Three phase chargers can add 80% power in 30 minutes, but they are rare.  You actually have to look up on the web where the car can take up energy.

In essence it is a small four door 2006 released vehicle, competent in the way the Japanese now finish off their small cars but all very plastic and including GPS.

The vehicle petrol heritage is easily spotted.  You plug in the electrics in the normal filler position.  Inside, the only changes are the addition of a battery meter, while the auto box is swapped for a selector with two modes – Drive and Eco.

It is a well kitted out car at the top end of the mini market.  You get all-round electric windows, central door locking with keyless entry, heated driver’s seat and wing mirrors, CD player and air conditioning.  Compared with the standard i, the rear engine, transmission and fuel tank have been removed, replaced by the motor and electronics.  A thin bank of lithium ion batteries is under the floor.  It's all properly production-tested, so you can drive through deep water unharmed.

One word of warning.  When driving around in busy pedestrian areas be particularly vigilant.  The car makes no noise.  Walkers hardly notice it.

Mitsubishi i-Miev is priced at £28,990, which drops to £23,990 when the government's £5,000 electric car grant is taken into account.  It is not subject to Congestion Charges symbolic perhaps for what is an expensive vehicle.  It is probably ideal as a run around for a company with a central London location/garage where executives who wish to drive themselves can have some fun when moving around the capital.

Hiring from Hertz is much the best option.  Cost is just £4 per hour or £40 for 24 hours, but that includes a full charge.  In practical terms it is by far the cheapest way to get to central London from Heathrow for a single person, and ridiculously cheap for four.

The future is probably electric and full marks to Mitsubishi for pushing ahead with their innovative vehicle.  But it has not quite arrived yet. 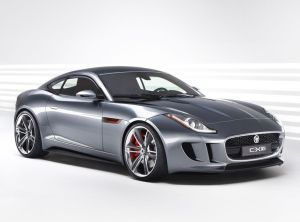 JAGUAR has to be the lead in story for the September issue of MOTORING UPDATE with the public debut of the stunning C-X16 concept car at the Frankfurt Motor Show this week , a car surely due for production in the near future perhaps even 2012.  The rear-wheel-drive, two-door, two-seat C-X16 is the smallest Jaguar car since the XK120 of 1954.  It measures up at 4.45m in length, 1.29m high and a massive 2.05m wide – dimensions similar to those of the next-generation Porsche 911 (4.49m long, 1.8m wide and 1.3m tall).  There are ‘toys’ galore projected for the car, clearly not just a case on handover with “here are the keys” (which probably do not exist in any event).  The 50th anniversary of the E type will be celebrated at the Goodwood Revival meeting from next Friday (22 September).  Charting the history of Jaguar sports cars will be a display taking in the SS100, the XK120 and XK140, the D-type and, of course, the car that is probably the most celebrated roadster of all time. www.jaguar.com www.goodwood.co.uk

CITROEN: The Citroen WRC rally team will be coming off the loose road rallies and taking to the tarmac for the first time in 2011 with their three car entry for the German ADAC Rally.  The team has been training on hard surfaces in German military bases. www.citroen.com

RENAULT: The French company Renault has posted a world record half year sales figure of 1.4 million units – up 1.9% over the same period in 2010. www.renaultretail.co.uk

ROLLS-ROYCE: The really well heeled Rolls-Royce buyer can now spend more on the car of their choice following the creation of Bespoke service enabling buyers to tailor their car with special craftsmanship items such as colour matched picnic hampers etc. www.rolls-roycemotorcars.com

UK new car registrations in August rose for the first time since June 2010, up 7.3% to 59,346 units.  “August represents a relatively small share of the new car market and the September new 61-plate registrations will be far more important for vehicle manufacturers and franchised dealers,” said Paul Everitt, SMMT Chief Executive. “The September new car market is always important for the UK motor industry, accounting for around 17% of the full year’s registrations.  Consumers are nervous about the future, but with industry offering unprecedented improvements in fuel economy, competitive finance offers and a wide variety of new models, buyers will find there is something to suit every taste and pocket.” www.smmt.co.uk