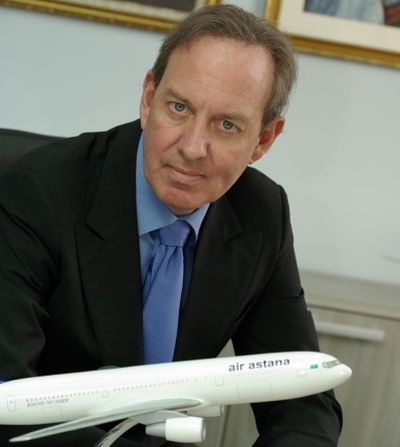 Peter Foster entered the airline industry immediately after graduating from Cambridge University in 1982, as a management trainee of John Swire and Sons (HK) Ltd, the owners of Cathay Pacific Airways.  From 1982-1999 he served in a variety of management and senior management positions with Cathay in Hong Kong, Asia, Australia and Europe, and underwent business management training at Insead, France.

Mr Foster left Cathay in 1999 to head up the rehabilitation team of Philippine Airlines Inc.  He subsequently served as Chief Executive Officer of Royal Brunei Airlines from 2002- 2005 prior to his appointment as President of Air Astana.

One of the snags of running an airline in central Asia is that we cannot expect to see ourselves crop up very often, at least for the right reasons, in the columns of the most venerated industry publications (from which I must exempt this esteemed publication).  Before I offend too many people I should say that we have our isolated cheerleaders in Airline Business and Air Transport World and others of the establishment  – and I have therefore come to the conclusion that the problem is neither editorial nor personal, but geographical and historical.  For the history of the airline industry has been written and continues to be categorized in, and as, the US, Europe, and latterly, Asia/Pacific and the Gulf.  A requirement for greater inclusiveness has dictated that the first and last of these two are now respectively “The Americas” and “Middle East and Africa”.  Sadly however, there is yet no home for central Asia, equidistant as we are from the shores of the Pacific, the oases of the Middle East and the forests of eastern Europe, in the regional round-up sections of the industry press which are the equivalent of The Sun’s Page 3 for most airline executives.

Vanity and hurt pride aside, anonymity has proved an absolute blessing.  When the Government of Kazakhstan and BAE Systems set up Air Astana on a shoestring almost 10 years ago, few observers gave the airline a chance, and fewer still imagined that it would be anything more than another failure in an inglorious line of airline fiascos which followed the break-up of the Soviet Union in 1991.  Yet here we are in our 10th year and the country’s 20th, nine years of unbroken profit and two successive record years, culminating in 2010 in which we are listed as the world’s 15th most profitable airline by net margin in the pages of Airline Business.

As much as I would like to think we are geniuses or alchemists, we are neither.  Quite simply we are lucky to find ourselves in the right place at the right time, a region almost entirely off the mainstream air transport radar at the start of the millennium and still obscure to many, but one that has been growing by an annual average of 17% during that time.

Growth has been fuelled by a combination of factors:  Voracious demand for the region’s minerals and metals from China and elsewhere, a high birth rate and growing population and, in the specific case of Kazakhstan, increasingly liberal economic laws and policies that have fuelled wealth creation, the rise of an affluent middle class and a massive hitherto pent-up demand for foreign travel.  Visit any European capital in summer or Asian beach in winter and you will hear an increasing number of Russian conversations, many of which are conducted not as you might think by citizens of Russia, but by Kazakhstanis and other central Asians – our passengers thank you, because the industry has suffered a collective blind spot by paying scant attention to anything other than the trade press.  There are a few honourable exceptions, all of whom have done well.

My alma mater, Cathay Pacific, built its foundations in the 1960s, 70s and 80s on the “surrogate home markets” surrounding Hong Kong, as did Singapore Airlines in southeast Asia during the same period.  Air Astana has followed this template to the letter.  Although Kazakhstan despite its vastness has a population of just 16 million.  If one draws a line 300km outside our borders the catchment increases to 80 million. Since Air Astana was given the specific instruction by Kazakhstan’s President Nazarbayev to operate and run its affairs strictly on the basis of best commercial airline practice, and since the rest of the government was told not to interfere, it is best practice for which we have striven.

Whilst we are pleased with what Air Astana has achieved in terms of safety, profitability, operational reliability and standards of service, running an airline of this type in a region in which infrastructure and regulatory framework are still struggling to escape from post-Soviet constraints can be a challenge.  Issues with ICAO and national/regional authorities such as ECAC are well-documented and continue to act as a drag on both reputation and development.  The region still bears its “wild east” moniker and remains the target of snide remarks on some of the industry’s more rarefied executive floors.  However, it needs to be remembered just how geographically and climatically difficult this region is.  We and our fellow central Asians must operate in extremes of temperature over vast distances to and through cities where aged airports are often the only means of communication.  In addition, shedding 75 years of Soviet regulation was never going to happen overnight.  When seen in this context the region is doing well. The regulation and imposition of safety standards in our industry is both more rigorous and more uniform than when the rest of Asia was developing, doubtless a good thing.  Sitting in Almaty however, I urge authorities and organisations such as ICAO, EASA and IATA to deploy the huge weight they carry in this region to go beyond preaching, to provide genuine assistance towards the improvements which regional authorities are well aware are absolutely necessary if the industry here is to develop in line with the rest of the world.