Finnish expansion for Flybe goes ahead 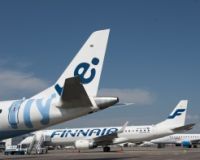 Flybe, which likes to call itself Europe’s largest regional airline, has confirmed the completion on 18 August of its joint acquisition, with Finnair, of Finnish Commuter Airlines (Finncomm).  Under the Flybe Nordic banner the airline will operate all existing routes previously flown by Finncomm together with the addition of nine brand new services.

The extended programme features four new destinations from Helsinki, four from key regional cities in Finland and one between Sweden’s Stockholm Bromma airport and Estonia’s capital city, Tallinn.  The nine new routes are as follows:

From Helsinki Flybe will serve Mariehamn – Aland (2 daily); Tartu – Estonia (6 per week); Trondheim – Norway (4 per week), Umea – Sweden (4 per week).  Tallinn will be connected to the Finnish towns of Oulu, Tampere, Turku and Vaasa with various frequencies.  Tallinn will serve Stockholm’s city centre of Bromma six times per week.

Flybe’s new routes will complement feeder traffic to Finnair’s international connections and be included in Finnair’s flight schedules and flown as code-share flights.  Finnair Plus customers will continue to accumulate frequent-flyer points on Flybe flights. www.flybe.com