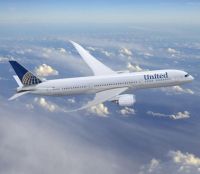 The lead Boeing 787 Dreamliner for United Airlines has entered the assembly phase at Boeing’s Everett facility near Seattle.  In early 2012, United will be the first North American carrier to take delivery of the aircraft, marking the first of 50 Dreamliners for the airline.

This first United 787 will be configured with 36 flat-bed seats in BusinessFirst (the old Continental Airlines product name being kept on), 63 extra-legroom seats in Economy Plus and 120 seats in Economy.  Customers will experience improved lighting, bigger windows, larger overhead bins, increased cabin humidity, reduced cabin pressure and enhanced ventilation systems, among other passenger-friendly features.

“We are proud to be the first North American airline to receive the 787, which will be a game changer for the new United and the industry,” said United Airlines President and CEO Jeff Smisek. “The 787 will be a very comfortable, customer pleasing aircraft, and with its range, fuel efficiency and superb operating economics, the 787 will allow us to enter new long haul markets and also replace older, less-efficient wide-body aircraft.”

The company will announce the 787 flight schedule later this year. www.united.com