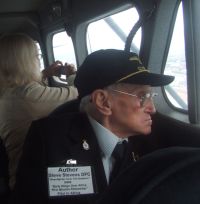 John Baker, winner of the AERBT Christmas quiz, has been welcomed to AIRBASE at Coventry Airport where he and his wife were able to fly in an Air Atlantique de Havilland Dragon Rapide on a sightseeing flight over Leamington, Warwick Castle and the Sir Frank Whittle memorial.

He was joined by Flight Lieutenant Steve Stevens DFC, now 89, but back in 1939 turned down by the Royal Air Force for being too young.  After his own house was bombed he vowed to become a Lancaster pilot joining 617 Squadron in 1943.  A veteran of the Berlin Air Lift he finally retired from the RAF Voluntary Reserve in 1971.  As an author he has written Beaufighter Over the Balkans and Early Wings over Africa for the First Mission Fellowship.

Steve Stevens first flew a Rapide 59 years ago remarking this time that the engines from the passenger seats were very noisy.  “You never heard the racket when sitting up front,” he said. www.classicflight.com/airbase