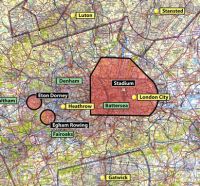 Following comments by the general aviation community on the harsh flying restrictions suggested by the Department for Transport (DfT) during the period of next year’s London Olympic Games, the Government has made some concessions.

Special rules are being brought in to cover the Farnborough Air Show which directly precedes the actual games.  Likewise the small airfields at White Waltham, Denham, Fairoaks and the London Heliport at Battersea will be under special arrangements.  This also covers the gliding sites at Lasham and Parham plus Elstree in North London.

In addition to the restrictions covering the south-east of England, other Games venues throughout the UK will now also be subject to temporary restrictions. www.airspacesafety.com/olympics