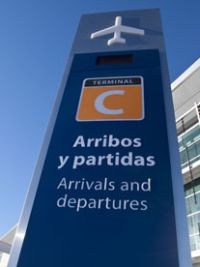 A new 21,000sqm terminal, named after the singer Mercedes Sosa who died in 2009, has opened at Buenos Aires.  It has eight boarding bridges, 12 border control stations and additional baggage screening areas.  Ezeiza International Airport (EZE) will be joined by a new 4-star hotel in late 2012/early 2013.  For the future a direct rail link to the downtown part of the city is planned.

Speaking at the opening ceremony, Argentinean President, Cristina Fernández de Kirchner, claimed that her country had a “wonderful new facility”.

She added: “I believe that it is a facility that Argentines and our international visitors will enjoy.  It is an impressive building that will also help the airport cope with future demand.

“I believe that the harmonisation of the roles played by both the public and the private sector in this project and others throughout the country have been the pillar for the growth that Argentina has been experiencing since 2003.”

The new terminal will be used exclusively by Aerolíneas Argentinas. www.aerolineas.com