ON TOUR: Vigo – a town on the move

Jane Stanbury has been to Northern Spain from Heathrow. 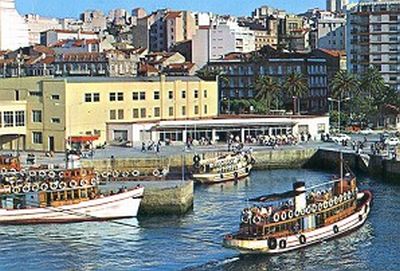 “You don’t need an overcoat in Vigo,” proclaims Abel Cabellero, the recently re-elected mayor of the bustling port.

Extolling the virtues of the town as a tourist destination to a group of British journalists it soon becomes apparent that he has great vision for this charming Galician destination.  Formerly Minister for Transport, Tourism and Communications in the Spanish Government, if anybody can put Vigo on the map it is probably Caballero.

Already in place is a collaboration with new generation, low fare Spanish airline Vueling to provide flights three times a week during the summer season between Vigo and Heathrow. 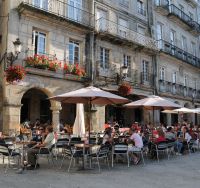 “These flights are split 50/50 between leisure and business, but we expect the incoming tourism business to grow, and would like to see the outbound tourists using Heathrow as a hub.  This is a great opportunity for us,” he continues.  The airport at Vigo is currently undergoing a modest development valued at around €4m and Caballero explains that capacity will increase from 1m to 4m passengers a year, no mean feat for a town that is primarily known for the large Citroen factory on its outskirts, and for being the second largest fishing port in the world – after Tokyo.

The mayor also has plans to improve the airport bus service increasing the schedule from hourly to every 15mins, the high speed TVG will come to Vigo (something he approved when he was a minister!), and there is an ongoing plan to provide cycling and network routes around the Vigo area.

Eye on the Conference and Incentive Market 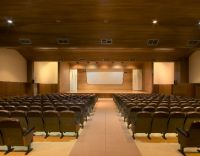 Located next to the busy port the construction of an impressive conference centre, The Auditorium Congress Palace features open spaces, a roof terrace perfect for a cocktail reception and a stylish auditorium for 1,700 people.  Opened just two months ago it is supported by a brand new hotel from the Galician hotel group, Carris.  The contemporarily styled Carrís Beiramar has modern rooms, a fantastic restaurant and is adjacent to the centre, a combination which will put Vigo firmly on the conference circuit.

Whilst eclipsed by its better known fellow Galician towns of La Coruna (also served by Vueling direct from Heathrow) and Santiago de Compostela, Vigo is sure to become as well known in its own right.

Situated on the west coast of Galicia, just 20m from the Portuguese border the snaking Atlantic coastline enjoys a microclimate which ensures the city is never really cold, and experiences balmy breezes through the summer months. 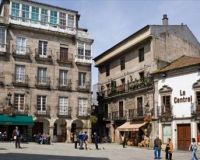 The outskirts are modern, urban residential areas, whilst the centre of the city is peppered with typical Spanish plazas, and the mayor’s campaign to create a verdant city is reflected in flowers, shrubs and trees creating a bright and airy feel.  The downtown area, featuring an array of restaurants, cafés and bars is easily walkable.

It’s the kind of city you amble through and always come across something interesting – like a man playing bag pipes, a pop-up book festival or as when we were there the Transforma music festival that had Moby headlining.

For the foodies Vigo is a delight.

As a major fishing port the daily catch is caught overnight, delivered to the dock, hived off by a busy set of fishermen and fishwives to restaurants, wholesalers and local shops.  You can visit the fish market in the early morning and view the frenzy as catches are unloaded, auctioned and shipped out in literally minutes, the best going to some of the finest restaurants such as Restaurante Piloto. 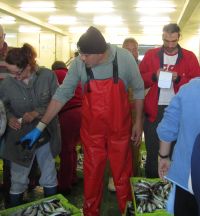 Perched on one of the many hills looking over the port Piloto serves regular fish dishes alongside the more exotic such as spider crab, scallop pies, or in our case “percebes” the dinosaur-toe like barnacles that cost a small fortune reflecting the life risking methods used to harvest them from the savage Atlantic coastline.  Followed by an overwhelming plate of crayfish then a delicious hake in a clam sauce it soon becomes apparent Galician life revolves around food.

As our guide said: “If there is one thing you should never complain about it’s the Galician food.”  But honestly, you’d never have cause to.  Tapas abound too, freshly cooked baby sardines, octopus – a typical Galician dish, mouth-watering cold meats and a bewildering array of cheeses all feature on the menu.  It’s a gastronomist’s delight.

“Legend has it,” says our captain Yvan from the yacht charter company Sailway, “that the Rias were created when God was busy creating Spain and put down his hand to rest.  The imprint he left created the Rias.”

These are deep-water estuaries which are protected from the rough Atlantic by the archipelagos of Ons, Sálvora Cortegada and Cíes.  The four principal sets of islands have prevented silting and ensured the deep-water entries to the harbours and go some way to explain why Vigo is such an important port.  The Rías are a natural pull for the sailing enthusiast, or just those that enjoy beautiful natural landscape, wide seas and big skies. 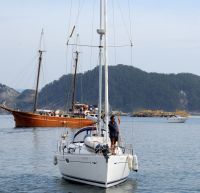 The Islas de Cíes, the most southerly of the islands, which together form the protected National Atlantic Park, are accessible from Vigo via a chartered yacht, or by a regular ferry service which stops at Vigo, and the surrounding villages to pick up day trippers, or campers wanting to visit and overnight on these stunning islands.

The beaches offer white golden sand, the marine life is abundant and even though the Atlantic is normally dark and murky the waters around the islands are a sparkling, turquoise.  So clean are they we were even able to spot an octopus going about its daily life in the marine waters.  The islands feature a number of walks through forests of laurel, Spanish oak and pine trees which in turn create their own biodiversity and at the highest points visitors are rewarded with stunning views of islands that were once homes to smugglers and pirates.  Only 2,000 visitors are allowed each day in the summer with less in the winter to help protect them, and they are certainly worth protecting. 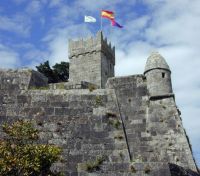 The sea features heavily in Vigo life and it is unsurprising to find a converted sardine canning factory established as the fascinating Museum of the Sea which hosts temporary exhibitions along with a permanent exhibition highlighting all facets of working, living and exploring the ocean.  The aquarium features flora and fauna from the surrounding water and its location right by a small beach means that should you tire of the history and culture you can head out for some sun and a swim.

Currently showing is an exhibition by Vigo’s most famous photographer Pacheo who from the twenties through to the seventies captured the full force of Vigo life.

Digitally enhanced black and white images have sailors, families and a plethora of Vigo characters staring out from the city’s past.  It’s a fascinating insight not only into Vigo’s heritage but of Galicia’s past.  So important are these images a museum dedicated to his work will be opening in the near future.  Staring into the faces of these historic Vigo characters you can’t help but wonder what they would think of Mayor Caballero’s ambitions for the city.

Getting there –Vueling fly from May to October from Heathrow. www.vueling.com