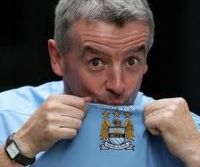 Having pulled out of Manchester Airport in spring 2009 citing high landing charges, and others hinting a poor performance, Ryanair is returning as of next October.

The Manchester Evening News (MEN) took in all the blarney splashing a banner heading of a £175m investment, this for four leased aircraft by the summer of 2012.  Mr O’Leary himself turned out for the press conference and claimed two million passengers and 2,000 jobs.  The re-introduction of Ryanair will undoubtedly help the airport but the figures have been challenged.  By wearing a Manchester City shirt O’Leary might have lost the Dublin-based airline half its custom.

Ryanair will offer 17 destinations with two aircraft this winter, joined by another pair for the following summer giving a total by this time next year of 26 routes.

Advertisements are likely in the MEN (amongst others) showing fares from £8 but this does not include a compulsory £6 check-in charge, or £2 Brussels fee. www.ryanair.com