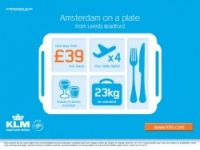 With a campaign reminiscent of the “London’s Fourth Airport” promotion more than two decades back, KLM Royal Dutch Airlines has unveiled a new above-the-line creativity to support a series of one-way fare advertisements.  The concept is a UK territory initiative which will be trialled throughout the Leeds Bradford International Airport catchment area before being rolled out nationally across KLM’s 15 British departure points.  It all started last week.

A senior member of the UK airline industry has pointed out that the enterprise could be construed as another way by a continental airline in benefiting from what was described as the British Government dithering in respect of Heathrow (LHR) capacity and the growing number of flights from Amsterdam (AMS) to China.  AMS now serves six Chinese cities as against LHR with just two.

The simple visual is designed to reflect the simple one-way all-inclusive fare offer including snacks and drinks, hold baggage and a high frequency schedule. www.klm.com