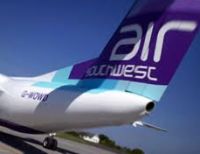 Plymouth-based Air Southwest is to cease flying by the end of September and with it air links to Plymouth, the largest city in Cornwall and Devon.

Plymouth Airport itself will close at the end of December, the property owned by Sutton Harbour Plc who also owned the airline until last year when the carrier became part of Eastern Airways.  Known locally as Roborough, the airport was opened by the then Prince of Wales in 1931.  In its heyday in the 1980s, under Brymon Airways, the airport boomed with four flights a day to Heathrow, the same to Gatwick, and also routes to the Channel Islands, France, the north of England and Scotland.  The city of Plymouth also gained dramatically.

When British Airways took over Brymon in 1994 it also acquired its valuable Heathrow slots and set the airline on the route to oblivion.  The final nail in the coffin was the airline/airport’s sale to Sutton Harbour, an ambitious and aggressive local property company whose sights were clearly set on housing development within the site.  Lip service was paid to the airline and the secondary runway was closed.

The BAe 146s of the Royal Squadron, and the Royal Navy, have been regular users of the aerodrome. www.airsouthwest.com