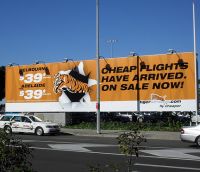 Launched with a big fanfare in November 2007 in Melbourne, and tracing part of its ownership through its Singapore-based namesake, to Singapore Airlines, Tiger Airways Australia has been grounded.  On 2 July, Tiger Airways Australia was initially suspended by the Civil Aviation Safety Authority from flying due to "various" safety concerns.  This follows several “incidents” none of which were fatal, with its 10 strong fleet of Airbus A320 series aircraft.  Ticket sales are currently suspended.

As things stand at the present time Tiger says that the postponement is only to the end of July and has made it clear in various statements that the public was not in danger due to flight procedure issues which the authorities were not happy about.  Long haul Tiger Airways flights to Singapore are not affected.

In a survey in 2009, Tiger Airways was voted the worst overall airline in Australia, with a 55% satisfaction rate.  However, it was also voted the best value airline.  Key reasons cited for this rating included high "ancillary" charges and poor customer service.  Managing Director Crawford Rix has resigned and leaves the airline at the end of this month.  He is replaced by Tony Davis, who set up the parent operation in Singapore and also bmi baby in the UK. www.tigerairways.com