ON TOUR: Brooklands makes a comeback

What was once the home of British Motor Sport was lost with the outbreak of World War II when aircraft production took over.  Or so most people thought. 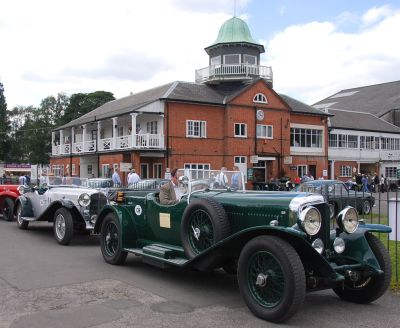 In 1987 the Brooklands Museum was created as a charitable trust.  From 1991 the grounds were opened to the general public, a reminder of times gone by not only in terms of motor sport but also one of the most important historical sites in the world of aviation.

And by one of those strange quirks with which life is all about, a new owner took over most of the balance of the Weybridge land, Mercedes Benz, the old adversary from those pre-war times.

Opened in 2006 Mercedes-Benz World is a brand experience centre (and a car show room).  At this impressive destination, visitors will find simulator rides, interactive challenges, enthralling exhibits and, most excitingly, the opportunity to take any one of the Mercedes-Benz car models around 2.5km of handling circuits.  For off-road fans, this extends to a 10-acre off-road terrain course complete with deep muddy water and steep, slippery slopes. 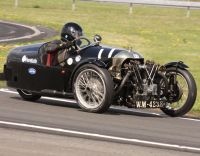 Located opposite Brooklands Museum, the Mercedes track offered an ideal sprint venue for the recent annual Brooklands Double Twelve Motorsport Festival.  With the VSCC as co-organisers, the competition element was stepped up this year with the Test Hill Challenge added to the traditional programme of Double Twelve Sprints, Driving Tests and Concours d’Élégance.  Making full use of every available space on the museum site to start up aero engines and parade exotic Alfa Romeo coupés in front of eager crowds, the track gave spectators so much to choose from at this two-day event.

In the Double Twelve Driving Concours, which ran on both days, the must-see car was undoubtedly Corrado Lopresto’s Alfa Romeo 2500SS Bertone Coupé, which won this year’s Villa d’Este Concours d’Élégance.  Full invitation classes of E Type Jaguars (marking the model’s 50th anniversary), three-wheeler Morgans (and even a brand-new three-wheeler in support) and Mercedes-Benz (celebrating 125 years of the world’s oldest car company) joined regular classes of veterans, cars with Brooklands history and cars in the Brooklands spirit to deliver an exceptional 12-class field of top-drawer classics. 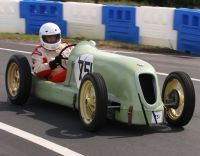 For many though, the icing on the cake was the dramatic trio of huge Napier Lion engines running simultaneously on the Sunday.  The only three 24-litre Napier Lion engines running in the world today are those fitted to the Museum’s own Napier-Railton and Chris Williams’ Napier-Bentley racing cars, and a third static-running example recently restored by Andy Lloyd.  All 72 litres and 1,600hp of them ran together for the first time on Sunday during the Test Hill Challenge.  They were joined by other massive engines, including the 42-litre Packard engine in Chris Williams’ Bentley special “Mavis” and the WWI Clerget rotary engine of the Museum’s Sopwith Camel replica.

The Brooklands ‘Spirit’ is alive and well and the Double Twelve is now a firm favourite in the Motoring events calendar.  The strokes of its brush are broad and its varied heritage means there is much to celebrate and this two-day extravaganza was the perfect homage to a bygone era that started at Brooklands. 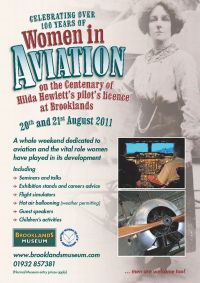 Brooklands Museum is open every day (except for a few days at Christmas) and displays a wide selection of Brooklands-related motoring and aviation exhibits ranging from giant racing cars, motorcycles and bicycles to an unparalleled collection of Hawker and Vickers/BAC-built aircraft, including the Second World War Wellington Bomber, Viking, Varsity, Viscount, Vanguard, VC10, BAC One-Eleven and not just Concorde but the world’s only working Concorde simulator used to train the pilots.

To celebrate a century of women’s flying (Britain’s first ladies pilot’s licence was issued to Hilda Hewlett at Brooklands in 1911) the Museum is staging a special weekend 20/21 August (that is during the school holidays) dedicated to the vital role women have played in aviation over the last 100 years.  There will be an exhibition, career advice, seminars and even a hot air balloon (weather permitting). www.brooklandsmuseum.com