ON TOUR: Editor Highjacked – Successful end to Lufthansa A380 crisis 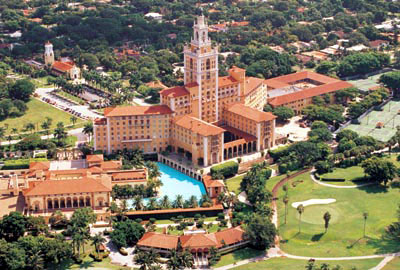 Your Editor in Chief was honoured to be the only British journalist invited on Lufthansa’s highly successful A380 inaugural from Frankfurt to Miami last week.  It was just like old times with Concorde, spectators lining the road parallel to the runway as the super jumbo landed.

It was by far the biggest turnout for the Airbus giant, according to the Lufthansa press team, who had covered all the previous six to date, and very well organised by the airport staff.

Host for AERBT was supposed to be the Alexander Hotel, Collins Avenue, right on the front at Miami.  And Gene Prescott (no relation to the Lord of that name noted for his two Jaguars and other extravagances), former Vice-Chairman of the Miami Convention Bureau, was only too happy to escort the Editor from the splendid reception organised by the airport to the hotel. 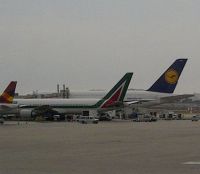 Except he did not.  What Mr Prescott’s chauffer did was drive the good Gene and Editor to the Miami Biltmore at Coral Gables, also under Mr Prescott’s brief, 5-star plus and an American National Historic Landmark.

Built in 1926 it was originally part of the Biltmore hotel chain which includes the Frank Lloyd Wright Art Deco property in Phoenix.  It served as a hospital during World War II and as a campus of the University of Miami medical school until 1968.  In 1987 it became a hotel again owned by the City of Coral Gables.  Now managed by the Seaway Hotels Corporation it is part the “Leading Hotels of the World” marketing consortium.

When completed in 1926 the Biltmore was the tallest building in Florida and at one time its pool was said to be the largest in the world.  Among the many attractions was swimming instructor, five times Olympic Gold Medal winner and later Tarzan actor, Johnny Weissmuller. 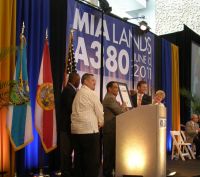 In its heyday, The Biltmore played host to royalty, both Europe's and Hollywood's. The hotel counted the Duke and Duchess of Windsor, Ginger Rogers, Judy Garland, Bing Crosby, Al Capone and assorted Roosevelts and Vanderbilts as frequent guests.  Franklin D. Roosevelt had a temporary White House office set up at the Hotel for when he vacationed on his fishing trips from Miami.  Here many gala balls, grandiose by the pool and weddings were de rigueur as were world class golf tournaments.  A product of the Jazz Age, big bands entertained wealthy well-travelled visitors to this American Riviera resort.

The Biltmore made it through the nation's economic lulls in the late 1920s and early 1930s by hosting aquatic galas that kept the hotel in the spotlight and drew the crowds.  As many as 3,000 would come out on a Sunday afternoon to watch the synchronized swimmers, bathing beauties and alligator wrestling.  Families would attend the shows and many would dress up and go tea dancing afterwards on the hotel's grand terrace to the sounds of swinging orchestras. 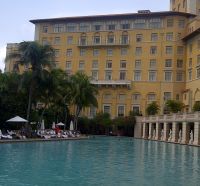 But with the onset of World War II, the War Department converted The Biltmore to a hospital.  It served the wounded as the Army Air Forces Regional Hospital.  Many of the windows were sealed with concrete, and the marble floors covered with Government issue linoleum.  Also as the early site of The University of Miami's School of Medicine The Biltmore remained a VA hospital until 1968.

In 1973, through the Historic Monuments Act and Legacy of Parks programme, the City of Coral Gables was granted ownership control of The Biltmore.  Undecided as to the structure's future, The Biltmore remained unoccupied for almost 10 years.  Then in 1983, the City of Coral Gables oversaw its full restoration to be opened as a grand hotel.  Almost four years and US$55m later, The Biltmore opened on 31 December 1987 as a first class hotel and resort.  Over 600 guests turned out to honour the historic Biltmore at a black tie affair. 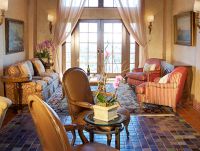 The hotel has been used as a setting for the movie Bad Boys and television programmes like CSI Miami and Miami Vice.  The hotel was also a major setting for Ken Wiederhorn's 1977 cult horror film Shock Waves, starring John Carradine and Peter Cushing.  The film was made at a time when the hotel was in a state of abandoned disrepair, and featured long camera shots and eerie angles.

Today The Biltmore is a luxury hotel with 273 rooms, including 130 suites, small by American standards but offering a high degree of service.  There is fine dining, a quality café the pool and also the wine cellar bar.  In the lower ground floor is a large gym and also a purpose built spa.  Wi-fi is gratis.  The Alhambra and Granada suites in the main building can each take 500 people reception and theatre style, and 320 for a dinner.  The adjoining Conference Center of the Americas can take up to 1,000 people for a reception. 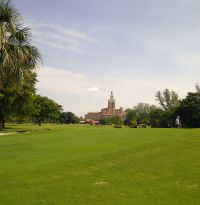 In February 2009 the Biltmore opened its very own Culinary Academy.  The Biltmore Culinary Academy is a recreational hands-on cooking school with classes for adults and children taught by the hotel’s chefs.  The three-hour signature hands-on class holds up to eight students and finishes with a meal made up of recipes made in class.

Adjacent to The Biltmore is a 6,800-yard, 18-hole, par-71, championship golf course.  The Biltmore Golf Course was designed in 1925 by Donald Ross, a Scotsman who was the pre-eminent golf designer of his era.  Two other challenging courses are close by. 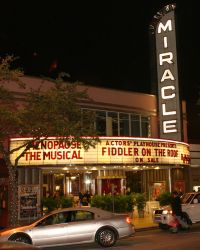 The mile or so walk from the Biltmore to the centre of Coral Gables is a real delight.  There are lots of trees and green spaces.  All the streets are named after Spanish towns.  No commercial properties at all and the traffic is light.  Coral Gables itself is built around a street called Miracle Mile, with plenty of designer shops and a real variety of restaurants.  It looks a pretty prosperous place with hardly any ‘vacant’ signs.  There is even a live theatre, the Actors Playhouse at the Miracle Theater.  A hotel courtesy car will take you both ways also.

A short walk from The Biltmore is the Venetian Pool created from a coral rock quarry in 1923 and a children’s paradise.  It is also included in the National Register of Historic Places.  This 820,000-gallon pool is fed with cool spring water daily, and features two waterfalls, coral caves and grottos.  The buildings are Venetian-style architecture, designed by Denman Fink, uncle of George Merrick. 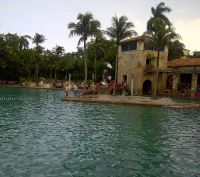 The Biltmore is ideal if what you want is a quiet luxury hotel with sporting facilities.  It is a US$20 taxi ride from the airport but with Miami so spread out hiring a car makes for much more sense.  And book your car from the UK.  Prices on-line, with typically Hertz, are good value and half that charged at Miami International. www.biltmorehotel.com