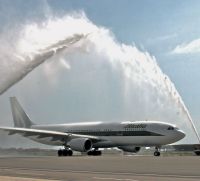 As first reported by AERBT towards the end of last year, the rejuvenated Alitalia is in an expansion mood with the introduction of two new routes.  June now sees the inauguration of flights to Beijing and Rio de Janeiro.

The Rome (Fiumicino) – Beijing service operates four times a week (five from October) and is an addition to the Rome – Shanghai operation in codeshare with China Eastern.

With the opening of the Beijing flight, Alitalia strengthens its presence in the Far East where it already is the only carrier to offer direct links between Italy and Japan.

The Rome – Rio de Janeiro flight will operate with three weekly frequencies throughout June, these will increase to four in July.  The connection to Rio widens Alitalia’s intercontinental network in South America, making Alitalia the first company in terms of connections between Italy and Brazil and the only carrier offering direct scheduled flights from Italy to Rio de Janeiro.

With both services, flights to Beijing and Rio de Janeiro are operated with new Airbus A330 aircraft featuring a three-class cabin configuration: Magnifica, Classica Plus and Classica. www.alitalia.com