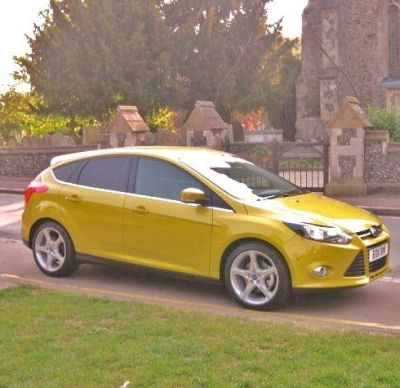 Change a product while it is still a winner.  That has clearly been Ford’s business plan for longer than I care to remember.  So far the products bearing the blue oval badge have seriously benefited from that policy and the new Focus looks certain to continue the successful trend.

The original Focus was one of my favourite medium sized hatchbacks (and practical compact estates) for numerous reasons, the major ones being the excellent driving qualities, immaculate handling and ride and the practical and comfortable interior.

Many of my Focus drives have been in hire cars and probably the model’s popularity/high usage showed up in the way of interior trim damage suggestive of cheapness.

No longer the case.  That came over immediately I sat in the new third generation Focus for the first time, my immediate impression was that Ford has cranked up the overall quality (as they did with the second generation Mondeo) to provide a much more substantial product.  I even noted that the driver’s door shut with a good ‘clunk’ factor!

Development throughout the car world has rocketed in the past couple of years and Ford has clearly kept in the environmental race in all respects, particularly when it comes to engine technology.  This test car employs a 1.6-litre turbocharged engine to deliver nearly 150 bhp in both a clean and refined manner, proving wrong the long-standing claim that there is no substitute for capacity.

Importantly Ford has retained the essential and sales dominating character of the Focus, prioritising a practical and comfortable cabin for five adults, above average boot capacity and a generous tailgate that, I found, allows very bulky items like furniture and white goods to be swallowed up.

At the front this new Focus feels a little larger than it predecessor, as I expected the driving position is excellent with good supportive seating with plenty of adjustment and notably improved contouring.  Add to that a fully adjustable steering column, good pedal position and a modern styled fascia with easy read instrumentation and generally good visibility and it is easy to appreciate why so many drivers feel at home in a Focus.

One point in the visibility though, the front pillars are quite thick and obscure the view when dealing with curves such as the approach to a roundabout, requiring head movement to achieve a satisfactory view.  Add to that, the large sweep of the windscreen wipers deposit the ‘wipings’ at the sides of the windscreen and adjacent to those pillars potentially increasing the visibility limit.

Driving the Titanium specification model (only the Titanium X is superior) I have the impression that Ford is after a still wider market sector by appealing to customers who may be trading down in size and overall outlay but refusing any major sacrifices in lifestyle.  I don’t think that they will be disappointed and nor will buyers of the lower specification Focus versions as the choice and options are so plentiful.

At the wheel I found the Focus to generate a feeling of a larger car and it is only when driving on country roads or parking did I appreciate the compactness of the car and, in the latter situation, note the self folding exterior mirrors.

A claimed top speed of 130 mph clearly proves the efficiency of the power unit while the claimed acceleration time of 8.6 seconds to 62 mph (100 kph) from rest shows just how lively this car is though the gears…and there are six of them all easily selectable.

As to economy, a combined figure of 47.1 mpg on this model equipped with the optional Stop+Start facility, is well into diesel territory.

As they say, it is not what you can do, it is how you do it, and this Focus is, as I expected, a delight for all drivers.  It is hard to push it because the running gear, including the all disc braking system, is so well honed it makes easy work with clearly defined safety margins.  Conversely the free revving, quiet yet flexible nature of the power unit makes for an easy driving life for those general local trips.

In essence there is a large quantity of the original Focus DNA but there is no denying this Focus has been strongly promoted in status. I strongly approve.


CITROEN: Hard on the heels of Top Gear’s 2011 Car of the Year award for the Citroen DS3 comes a similar accolade from Diesel Car Magazine plus the Best Small Car award. www.citroen.co.uk


FORD: Ford and the Ohio State University have announced a project to use the white sap from the dandelion root to produce a sustainable rubber substance that could be used in the manufacture of cup holders, floor mats and trim material.  Soy foam is already used in the car seats. www.ford.co.uk


SEAT: The new SEAT Alhambra MPV 7-seat model has recently been voted Best MPV of the year by Diesel Car and Fleet World Magazines.  The Alhambra has already clinched the Car Buyer UK and What Car? Titles for the MPV of the Year. www.seat.co.uk


SKODA: A new SE Plus specification has been introduced across the entire Skoda range.  Fitting in between the SE and Elegance specifications, it offers equipment upgrades savings worth between £600 and £1,200. www.skoda.co.uk


VOLKSWAGEN: To celebrate the 35th anniversary of the VW Golf GTi, a special ‘35’ model featuring a hotter engine, body cosmetics and special lightweight alloy wheels will be introduced later this year. Price to be announced when order books open.  Also announced is the Argentinean made Amarok pick-up, a five-seat double cab plus a generous sized pick-up space.  Powered by a choice of two 2.0-litre turbo diesel and using VW’s proven 4Motion 4x4 transmission, it will sell from £16,995 plus VAT and OTR costs.  Marketing will be through most VW commercial dealerships. www.volkswagen.co.uk


VOLVO: Testing is under way on a Volvo V60 plug-in hybrid model.  Powered by a 215 bhp diesel engine driving the front wheels and a 70 bhp electric motor driving the rear wheels, the car is claimed to have a potential consumption of 150 mpg and a range of 760 miles. www.volvo.co.uk