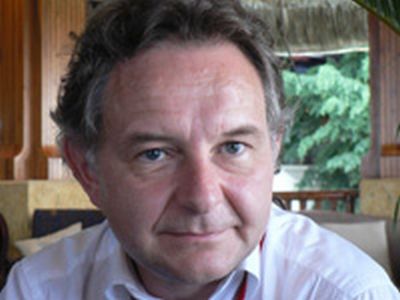 Conrad Clifford has been Chief Executive of the Monarch Group since September 2010.  He began his aviation career as a trainee with Cathay Pacific and has over the years held a succession of senior appointments including Virgin Atlantic, General Manager and Commercial Director; Menzies Aviation Group, Commercial Director; and Emirates, VP UK and Ireland.  He also established Virgin Nigeria.  Monarch Airlines is now easily the longest established airline in the United Kingdom with essentially the same ownership throughout.

Last Wednesday was a blur as I was shuttled from one recording studio to the next to speak to various radio and TV outlets about the re-launch of Monarch as a scheduled airline.

The day started before dawn at the BBC and ended in the rarefied atmosphere of the Gherkin building as I was grilled by Jeff Randall on Sky News about the plans for Monarch.

Of course, Monarch has been a scheduled airline for a little while now.  Five years ago Monarch was about 80% chartered and 20% scheduled.  Today, we are over 70% scheduled and will be 80% by next summer.

But because Monarch has such a long and successful track record of chartered operations, too many consumers still saw us as the charter airline they got when they booked a package holiday.

But hopefully that is now changing thanks to our re-launch and accompanying rebrand of Monarch to support scheduled operations.

The package and charter market is still a core part of our business, but to achieve real business growth, we have to be successful in the ultra competitive scheduled market.

So how are we going to do it?

When the low cost airlines arrived on the scene, they completely transformed the industry.  But today, innovation has largely disappeared from the airline industry in Europe.

Monarch wants to change that.

To begin with, we are not going to tell customers how they should travel.  Rather, our customers will be able to choose the way they fly.

That means consumers will be given a competitive price for an allocated seat with great service.  Then, they have the freedom to choose what additional services they want.  We have a menu of options such as seats with extra legroom, a really tasty hot meal and a business lounge ticket (through a third party provider).  So if they want to travel from A to B at the lowest possible price, then we can provide that.  If a customer wants all the trimmings without having to fork out a significantly higher sum for a Business Class flight on a legacy carrier – then we can provide that too.

The “one size fits all” approach simply won’t work anymore.  Monarch is committed to offering the most flexible and value-led proposition in the industry.  We call it “Fly your way. Every day” – a message that is now integrated into our new branding.

Jeff Randall on Sky News made the assertion that airline passengers made their choice of carrier purely based on price.  I just don’t believe that is the case.  Yes, of course price is vitally important, but consumers generally do not mind paying a little bit more if it means that they have a far less stressful travel experience.

To assist in providing that experience, Monarch has also embraced social media.  We launched a Facebook page last week and we can also be found on Twitter.  Social media engagement isn’t an optional extra these days.  Increasingly consumers want to communicate directly with their airline through these channels and expect a rapid response.  Want to check if your flight is on time in periods of bad weather?  You will be able to ask us on Twitter and get a prompt response.

Social media isn’t just for the benefit of our customers – it is also a source of invaluable feedback for us.  We want to continually improve our service, but that means we need to hear what our customers are saying.

In addition, Monarch is committed to open and fair pricing structures.  Consumers are sick of “drip pricing” and so we took the decision to ditch debit card fees and introduce an easy to understand, flat fee of £10 for credit card payments.  We are now signed up supporters of the Which? campaign to encourage all airlines to introduce fair and transparent credit and debit card charges.  And it is my sincere hope that airlines with excess payment card fees now follow Monarch’s lead.

The initial signs are that consumers are responding positively to the changes we have introduced and I am convinced Monarch can continue to grow as a niche airline that focuses on scheduled operations to sunshine destinations.

Now if someone can just discover a huge oil field near Luton and my week will be complete!