Figures from EBACE 2011 suggest that European business aviation has begun the road to recovery.  At this year’s Geneva show nearly 13,000 industry delegates, representing 108 countries visited a record 511 exhibitors.  Some 62 aircraft displayed on the static and EBAA President Brian Humphries said he had just one complaint – “it was a shame the three-day event couldn’t go on for one more day.”  The upward trend reflected latest Eurocontrol statistics that private aviation was up 5.5% this year.  British business jet operators including Gama Aviation, LEA and PremiAir noted that financiers are back flying again.  “Business clients have not fallen out of love with private aviation, but with a lack of business to chase last year they had no reason to fly,” said Gama CEO Marwan Khalek who also reported that business aircraft owners are flying more too – up to 20-30% more hours than in 2010.

The 11th edition of EBACE also saw the return to nine-digit aircraft orders.  Bombardier confirmed the mystery buyer of two Challenger 605s and six Global 6000 business jets earlier this year was VistaJet, while predicting that the sector will deliver around 24,000 business jets between now and 2030. 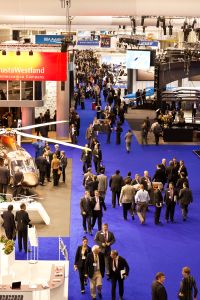 VistaJet, which operates a dedicated Bombardier fleet, disclosed its overall order covered 12 Globals and Challengers, plus six Learjet 60 XRs valued at US$383m with deliveries expected to begin in 2012.  Thomas Flohr, Chairman of VistaJet, stated that the aircraft would support the growing sectors of “fast-growth markets” such as Brazil, Russia, India, Nigeria, China and the Middle East.  It was a good show too for Embraer, which announced orders for three Embraer Legacy 650 business jets from Switzerland’s Comlux, replacing their Bombardier 605s.  Comlux also placed a further four large-cabin aircraft options.  Airbus showed both a K5 Aviation GmbH Airbus ACJ319 cabin and a Comlux Airbus ACJ320 in a first time appearance for both at any air show, announcing that its corporate jet sales have now surpassed 170, flying on every continent, including Antarctica.

Whilst announcements for large jets confirmed demand is still greatest at the heavy end of the market, Globair of Austria quelled any suspected demise of the light jet market by announcing an increase of its fleet size to 11 Cessna Mustangs, making it the world’s largest Mustang operator.  The company, which claims a 25% share of Europe’s light jet charter market, is anticipating a doubling in passenger numbers over the next year.  A new kid on the block making its presence known at EBACE was Portugal’s Everjets, a subsidiary of fashion and textiles specialist Ricon Group, which announced the purchase of an Embraer Phenom 300, plus a second on option.  The new aircraft will be delivered in December, bringing a stylish offer to the southern European market. 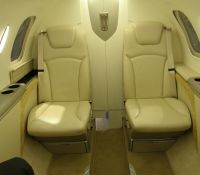 As the European light jet market settles, the first Phenom commercial operator in Europe, Oxford-based FlairJet, announced a new initiative to support those operating in the sector by sharing its expertise and expanding its third party training department.  “We have identified an opportunity as more Phenoms come into Europe, which provides operators with third-party training and offers a flexible menu format that owners and pilots can pick and choose from,” said David Fletcher, CEO.  FlairJet announced at EBACE that it would base a Phenom 300 at Cannes Airport this summer, and so did Czech Republic-based operator Grossmann Jet, which will position its newest Cessna Citation II from June.  Edwin Brenninkmeyer of Oriens Advisors, specialists in the entry level jet field, commented: “We’ve not seen any light jet operators fail because of wrong aircraft choice.  Our experience shows that those who focus on costs, keeping lean and knowing their customer, as well as maximising IT are those that will survive.” 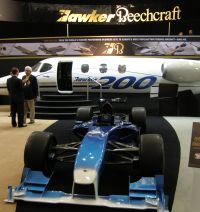 A number of new aircraft types were also unveiled at the show.  Dassault previewed its new mid-size cabin Falcon 2000S, which will have two engines and carry 10 passengers.  Service entry is planned for 2013.  Eurocopter unveiled a luxurious new EC145 Mercedes-Benz Style helicopter, which can seat up to eight passengers, offering a sleek design and large storage space in the tail area.  TBM Daher SOCATA, celebrating its 100th anniversary at EBACE, showcased a special edition of its TBM 850 single high-speed turboprop, featuring an eye catching paint scheme.  However, the French company was keeping tight-lipped about its ultimate plans for the Grob Spn light jet.  Nicolas Chabert, VP Sales and Marketing said that their evaluation could go beyond June, but acknowledged that Prototype 3 had now flown successfully over 25 hours and the evaluation concerning restarting the light jet programme was still in progress.  Meanwhile, there were positive noises from Piaggio’s new Managing Director, Eligio Trombetta, who said that final design of their planned new light jet, dubbed the P1XX, should be agreed by mid-year.  Expect to hear more about that at NBAA in October.

There was also a buzz surrounding the sectors supporting business aviation. ExecuJet Europe, which marked 10 years in Switzerland during the show, announced the opening of three new Spanish-based FBOs in Girona Ibiza Palma, which join its existing group of eight European FBOs.  The Middle East’s only dedicated business aviation airport, Al Bateen Executive at Abu Dhabi, announced a new brand for its FBO – DhabiJet, while Gama Aviation signed an agreement with worldwide catering services provider Private Flight which will support catering operations of its 80 business aircraft in its three key markets – Europe, the Middle East and the United States.  Flying Colours, the Canadian-based VIP interiors specialist, announced a partnership with List of Austria as their preferred completion centre in North America to carry out installations of its unique stone flooring products.

Wednesday afternoon was given over to the Olympics and the overall message was be prepared, book slots early and make provision for extra staff well in advance.  Fourteen UK airports have been allocated specific numbers of movements beyond their general levels.  Whilst London City has been given just eight, secondary airports such as Cambridge and Oxford have been allocated 520 and 382 slots respectively.  “High demand is expected at key times, particularly around the opening and closing ceremonies, it is therefore important that clients secure their desired landing and departure slots as early as possible.  There are certainly enough high quality jets available in Europe to meet demand.  Our advice to our individual or corporate clients travelling to the Olympics is to plan in advance to ensure they get the arrival and departure times they require.  Advance booking by users will alleviate the anticipated runway capacity problems,” suggested David Macdonald, Director Private Jets at Air Partner plc.

In preparation, Oxford Airport announced its decision to install the latest generation radar system from Thales, a precursor to the next major phase of redevelopment at the airport which will be implemented in time for the Games.  Cambridge Airport announced an initiative which sees operators that prepay receiving guaranteed parking slots which are anticipated to be at a premium during the summer.  Aviator, the TAG owned Farnborough-based hotel, has already received crew bookings and is suggesting that early reservations should be made with them, as well as the airport.

The Olympics will undoubtedly test UK and European business aviation’s prowess but after this year’s optimistic EBACE the future looks bright for this part of the aviation sector.  www.ebace.aero 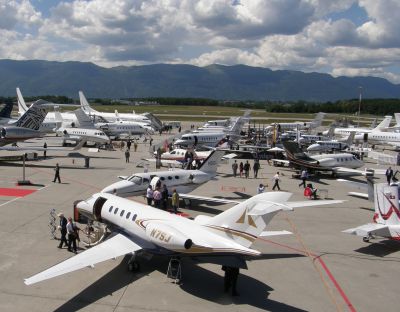