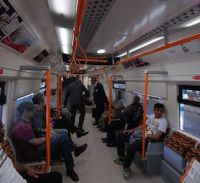 Visitors to London and residents are to benefit from the completion of a major upgrade to the Overground network which, although promoted as an Olympic improvement, was a necessity that would have probably taken place in any event.

The three-year £550m project delivers up to double the number of trains on key Olympic rail routes.  London Overground services from Richmond and Clapham Junction to Stratford will run four times an hour every day, increasing the total number between Willesden Junction and Stratford to eight trains per hour in the peak.  In addition four trains per hour will run every day on the Gospel Oak to Barking line and up to eight trains an hour between Highbury & Islington and Dalston Junction on the East London route.

As part of the upgrade Transport for London also funded a fleet of 57 brand new air-conditioned trains, and an impressive station refurbishment programme.

The Mayor of London, Boris Johnson, said: “Three years ago London Overground was rundown, neglected and an embarrassment to the capital.  Three years later we have transformed it into one of the nation’s top performing railways.  It will be of benefit to Londoners for many years beyond the Olympics.” www.tfl.gov.uk