ON TOUR: I know that I am mad – but harmless 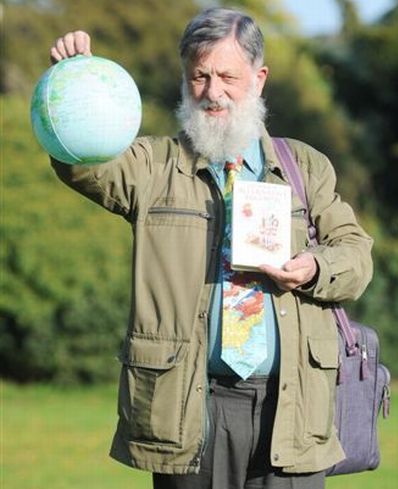 Michael Bartlett, or Brother Bartlett, as is his official title, has set yet another world travel record.  A member of the Oratory of the Good Shepherd, an international community of Anglicans, the 70-year old recently flew both east and west around the world from London with one circuit being inside the other.  In the space of eight days he used scheduled services to Australia from London, with a total time in the air of 215hrs 31mins.

Until sent out to Zululand as a voluntary worker in 1969, Michael Bartlett was an avid train spotter.  Flying from Heathrow to Durban via Lisbon, Windhoek and Johannesburg he stepped off the Viscount at Louis Botha Airport 1 September 1969 with the immortal words, "From now on – never a train – always a plane."

Then in the early l980s, when a Mr David Springbett flew around the world using Concorde and set a record, Michael vowed to "get into the Guinness Book of Records".  A colleague suggested he would never do it.  He did.  In 1988 he achieved the most scheduled passenger flights in one day – 18.  He was beaten by a young lass in the Channel Islands – 24, which Michael turned round to 42 in 1990.

Brother Bartlett holds the record for the fastest circumnavigation of the globe on scheduled flights with a single airline at 59hrs 58mins when he travelled with Air New Zealand from Heathrow to Hong Kong, and then Auckland – Los Angles and back to Heathrow 21-24 November 2006.

Michael's latest adventure was to celebrate his 70th birthday when he flew round the world once in each direction eastwards and then westward taking 8 days, 23hrs 31mins.

These are his words.

“I am booked to fly from London to Dubai and then Bandar Seri Begawan (Sultanate of Brunei) and onwards to Brisbane aboard a Boeing 777 of my 250th airline, I will spend 36 hours with the Brethren and  then return to London with Royal Brunei.  After a night’s sleep near Heathrow Airport it’s off to join Air Canada and fly to Vancouver.  A few hours rest and fly on to Sydney (14hrs 30mins flight) where, on arrival, I will hop aboard a Virgin Blue B737 to Brisbane.  That means I will have flown westward around the world, Brisbane to Brisbane.

Having begun the holiday by flying to Brisbane, I will continue the eastward journey by returning immediately to Sydney.”

He continues with some more notes.

“I arrived home yesterday (Friday) from my ‘Twice Round the World, once in each direction’, and can report all went well.  It was interesting.  Royal Brunei with their 777s, the service was excellent.  The girls were beautiful and for the first time ever, I saw that one attendant's job was to check the loos after each use by a passenger.  Excellent.  Food beautifully presented, hot and with proper cutlery.

Air Canada, no youngsters in the crew but the attendants were in all ways professional, addressing passengers by name as you walked on.  Every 30 minutes walking round with water (and anything else you requested).

However the difference in the 777s was noticeable.  More room on the Canadian ones than the Royal Brunei, though I can't complain because I had the front row aisle seat "C" in all cases but one (window seat K).  Royal Brunei was full and Air Canada 60% full on the two return flights.

We the passengers are encouraged to read the Safety Card on each flight are we not?  I was on Virgin Blue Sydney/Brisbane return.  I was in 13C and two young lasses A and B.  They took out the card and held a conversation about their safety, very sensible chatter.

They looked under the seat for the life vest and around the plane for the life rafts which were described as being "in the roof rack".  They (and me) therefore WE could not see them.  So when the attendant came round we asked where they might be.  His reply?

"There are no life rafts on this aeroplane."

"Because this plane flies over land and not the sea."

Does not say much for Virgin Blue to have cards on their Boeing 737-700s and 800s showing life rafts and there are not any aboard.

I have no objection to security at airports – BUT.  I have flown how many times and used a see through bag bought at Lloyds chemist 10 years ago and no one has objected until a silly woman at Terminal 3 Heathrow last Sunday.  Said it was not acceptable.  She could see my toothpaste and eye ointment and one toothbrush.  She made me change it.  I told her that I had flown around the world using that for 10 years showing it every time and no one had challenged it before.  She replied "Not acceptable at this airport".  I could not be bothered to argue – but ridiculous.

Dubai is equally silly. One gets off the Royal Brunei plane for the re-fuelling, goes through security and then straight into the lounge awaiting boarding.  At Brunei (BWM) one goes into the transit lounge, buys water and not permitted to take it aboard – ridiculous.

I was given an excellent tie by my brother with a world map upon it and a picture of aeroplanes.  I looked carefully on all 12 flights and I did not see one other Economy Class passenger wearing a tie.  Many commented on the fact that I was wearing one and admired it.

A wonderful experience.  Most of the time.

And I shall repeat:  I know that I am mad – but harmless.”