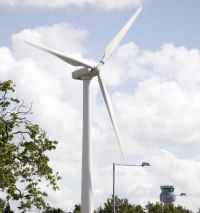 Propellers may have been all the rage at East Midlands Airport (EMA) years ago, but attached to aircraft.  They have now made a, sort of, comeback but this time firmly fixed to the ground, and installed as wind turbines.  EMA is the first UK airport to install turbines of this magnitude.

After making a commitment in December 2006 to make ground operations carbon neutral by 2012, the airport sought to implement this innovative project, never yet achieved by a British airport, to generate energy from wind power.

After a comprehensive process and working in partnership with experienced specialists, the airport successfully managed to produce a comprehensive and robust safety case that has allowed commercial scale wind turbines to be installed on an airport site.

Accepted by the Civil Aviation Authority (CAA), the safety case will now be produced into an off the shelf product for other airports and businesses, both in and out of the aviation industry.  The turbines measure 45 metres including the rotor blades, which have a radius of 15 metres and together they will produce 5% of the airport’s electricity, enough to power 150 houses. www.magworld.co.uk