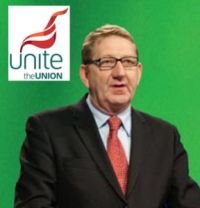 Unite General Secretary Len McCluskey gave a very erudite and informal press briefing last Thursday lunchtime before addressing BA cabin crew at a mass meeting to update them on talks between the union and airline bosses.  He praised new BA CEO Keith Williams and refused to be drawn into any discussion regarding Willie Walsh.  At this gathering nearly 2,000 members of the trade union’s cabin crew branch, the British Airlines Stewards and Stewardesses Association (BASSA), gave a go-head for a dispute settlement.  This still has to be confirmed by postal ballot of the 9,000 members, but this in considered a formality.

Under the settlement staff travel concessions, one of the key issues holding up an agreement, has been returned to the strikers.  A two-year pay deal was also confirmed which, subject to productivity improvements, will result in staff receiving increases of 4% and 3.5% each year respectively.  In return, Unite has accepted the introduction of ‘new fleet’ changes, which will see fresh recruits employed on less generous terms than existing personnel.  Such proposed changes to working practices were the key trigger for industrial action in the first place. www.ba.com www.unitetheunion.com