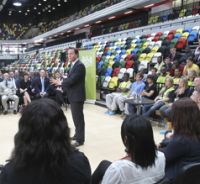 With excitement beginning to rise in anticipation of next year’s London Olympic Games all the details are beginning to fit together.  At Geneva, later this week (Wednesday), Dawn Lindsey, London 2012 Olympic Airspace Planning, Directorate of Airspace Policy, UK Civil Aviation Authority and Phil Dyckins, Head of International Air Services at the UK Department for Transport, will discuss aviation security with special emphasis on next year’s UK events.

Organised by LOCOG (London Organising Committee of the Olympic Games), a programme will focus on testing the sporting fields of play; results, timing and scoring systems; how teams work together and how people move around venues.  There are different groupings of events: events which LOCOG is organising and ticketing, events run by LOGOG that are not ticketed, and events which are not organised by LOCOG.

The four ticketed LOCOG events this summer are: