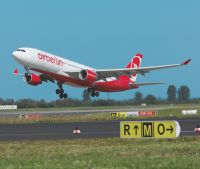 Air Berlin has introduced a four times per week service from Berlin to New York.  Initially the airline uses the existing Tegel Airport but in June 2012 it will transfer operations to the rebuilt Schoenefeld, renamed Brandenburg International.  At New York, JFK is the entry point.  A two-class Airbus A330 is used for nine-hour flights.  Air Berlin competes with Delta’s daily service to Kennedy, whilst Continental also serves the German capital, but from Newark Airport in New Jersey.