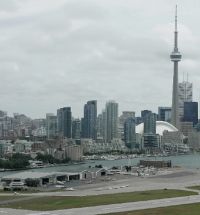 Porter Airlines for the first time is experiencing head-to-head competition at Billy Bishop Toronto City Airport.  Under the brand name Air Canada Express, Sky Regional Airlines is providing up to 15 daily non-stop return flights between the rejuvenated downtown operation and Montreal Pierre Elliott Trudeau International Airport.  Both airlines operate the Bombardier Q400 which is assembled locally in Downsville Toronto.  Previously Air Canada operated as Jazz out of the airport but closed the operation in March 2006.

Porter Airlines made its inaugural flight in October 2006 and now offers 14 destinations including Boston, Chicago and New York.  It has a fleet of 24 aircraft with six more on the way.  On the Montreal route currently there is a maximum of 23 outbounds.

Billy Bishop Airport is on an island with access only by ferry.  The amenities have steadily improved since Porter’s introduction and are now equal to those offered at any major airport.  Toronto – Montreal is Canada’s busiest trunk route with around 1.35m passengers per year currently split two-thirds in favour of the international airport pairing. www.aircanada.com