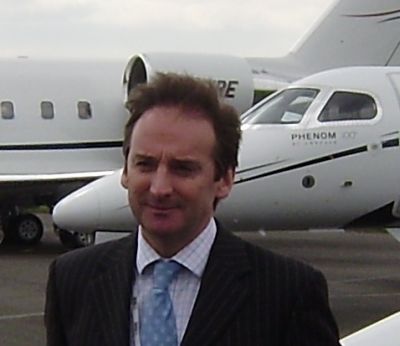 James Dillon-Godfray is a product of the British Aerospace / de Havilland Training School – Hatfield.  From 1988 until 1994 he was Regional Sales Manager - Asia Pacific - BAe (Raytheon from 1993) - Hawker 125 sales before joining Air Hanson at Blackbushe as Head of Sales in 1995.  In 1998 he moved to Oxford Airport as Director of Sales - Group Marketing, CSE Aviation/Signature Aircraft Engineering (BBA Aviation plc) taking up his present post in 2003.

‘Learjet Levy’ – another cunning plan from the Treasury

It seems the current UK Government can’t help themselves but to continue on the banker-bashing agenda with policies that ultimately drive businesses away from these shores.  The double benefit with this proposal is that they can bash aviation at the same time – twice the kudos with the downtrodden electorate and one very ill thought-out proposal.  The new scheme to extend the UK’s Air Passenger Duty (APD) down to aircraft with just a handful of seats from the 20-seat lower benchmark today, achieves very little in terms of either filling the Treasury’s coffers or indeed helping the environment.

Light, privately operated aircraft, tend to carry a few passengers at most and with around 125 ‘business aviation’ flights in the UK a day on average (according to Eurocontrol data), that equates to barely a 737-load of private aircraft passengers a day from whom the tax would be levied.

With ‘private’ executive aircraft on a multitude of different international registers, the task of monitoring, auditing and chasing payment of APD from owners and operators of these business aircraft overseas will prove extraordinarily challenging and burdensome.  The administrative costs of levying such a tax on this particular sector of aviation will be exponentially higher per passenger than is the case with the airlines.  Indeed it will be near impossible to do so in the case of certain international aircraft.  The UK taxpayer is getting very little bang for their buck on this one.  There is no proposal right now for UK airports to recoup the tax on behalf of HM Treasury, but if there was, why should they do HMRC’s dirty work for them?

What grates most with the general aviation industry, operating these types of aircraft for a multitude of specialist roles often on schedules impossible to achieve using the airlines, is the suggestion that as HM Treasury can’t be bothered to differentiate between journey lengths in this sector, they’ll just levy the maximum possible fee of £186 (from 2012) per passenger.  This is arguably lazy extortion, as if to assume eight engineers on their way up to Scotland on a chartered turboprop like a Beech King Air, perhaps to fix a power station, might as well be flying to Australia for the day.

UK-based aviation is taxed more than in most other countries around the world.  Contrary to the common perception that VAT is not paid on fuel, privately operated aircraft in this country do indeed pay.  We’re about to have a double whammy of being taxed an extortionate amount per passenger via APD, on top of which the sector will now pay for the EU Emissions Trading Scheme (ETS).  For private aviation, participation in the EU ETS is proving extraordinarily complex and bureaucratic.  In the main, commercial airlines will be given their allowances, whilst small business aircraft operators will have to pay for theirs.

General Aviation (that is civil aviation other than airlines) is estimated to contribute a mere 0.016% to global emissions, hardly the devil’s preferred form of transport.  European aviation as a whole accounts for just 0.5% of global CO2.  Yet UK aviation contributes some £18bn to the UK economy and £8bn to the exchequer.  Making the UK even worse than it already is in terms of penalising aviation will simply drive business and tax revenues to mainland Europe, it won’t reduce the demand.  Ultimately, we all lose.  On top of this, the UK makes it particularly burdensome and indeed costly for many international visitors to gain visas to visit these shores in the first place.

For short trips in the UK and Europe, on certain aircraft types over 5.7 tonnes, the proposed new lower weight limit could overnight add 12% or more to the costs of the trip.  In an extreme case, certain chartered 19-seater aircraft could immediately see an additional £3,534 levied on even the shortest trips, which could be 50% of the cost, quite ridiculous and irrational.

From Oxford Airport, private ‘business’ aviation is utilised by a multitude of professions and business leaders.  These people in many instances are driving the UK economy and in a country where overall productivity is far from the best amongst our peers, these individuals at least are cramming in the most activity into their schedules as is possible.  Business aviation facilitates deals being made, contracts being signed, exports and ultimately revenue for the Exchequer.  Jobs being created by these entrepreneurs are essential to take this country out of the economic demise.

Much of the general aviation industry has been on its knees since the onset of the recession, indeed many businesses have failed.  Making the UK one of the worst places for aviation to evolve and develop will further kill us off and simply focus the private aviation scene offshore in mainland Europe – they win, we lose, very simple.  The industry consists of many small companies operating on margins comparable with many other small businesses, tiny.  Several years ago, the UK general aviation industry introduced a voluntary carbon offset scheme before the EU ETS was applied to aviation.

Certain recent Government proposals would seem to make sense for ‘UK plc’, commitments to streamlining the planning process to help airport’s develop, corporation tax changes which may aid inward investment into the UK, but this is one tax change that makes little sense, a headline-grabbing gesture that carries next to no real benefit, indeed will do great harm in its current form.

We believe the level at which the ‘private aircraft’ tax has been set, the maximum possible under APD, is simply disproportionate and a deal-breaker for certain smaller aircraft charters on shorter trips.  We also believe there is no justification for charging APD on top of EU ETS on an industry already suffering due to the downturn.  Charge something, by all means, but not both.

If taxation on aviation was genuinely to offset its impact on the environment, a far simpler formula would be to extract around two pence from every litre of jet fuel burnt, which, put towards programmes to negate emissions elsewhere would effectively neutralise the impact of any flight.  Alas international laws and lack of commonsense contrive to make this impractical.  Unilateral approaches to taxation on aviation only serve to drive business to the next country, as it will in the UK.  Of all sectors, shipping and aviation can and will move away from this island if legislation and taxation make it necessary to do so.  The fact that the UK is one of the few countries that charges VAT at 20% on professional pilot training drove much of that industry overseas.

Whatever the Treasury settles upon, it should at least be fair, good value for the UK taxpayer, easy to administer (essential) and not place another UK industry into a competitive disadvantage with our neighbours.  And, if all this taxation is to contribute towards new environmental measures rather than topping up the central coffers, prove it.