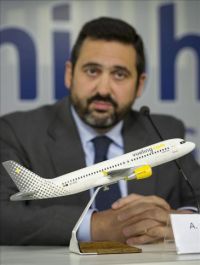 Vueling inaugurated on Saturday (16 April) a three times per week service, on Tuesday, Thursday and Saturday, between Heathrow and Vigo in Northern Spain.  The airline also connects London to Bilbao, La Coruna and Seville.

The new London – Vigo route was previously operated by Clickair, (which merged with Vueling in July 2009) during summer 2008 and 2009 with very successful results, with load factors reaching 78% in peak season (July and August).

During the 2011 summer season Vueling will operate a 47-strong aircraft fleet serving in 50 airports in 23 countries in Europe, North Africa and Middle East.  Six of these airports are permanent bases of operations (Bilbao, Barcelona, Madrid, Malaga, Seville, and Valencia).  A seventh, Ibiza, is a base during the summer.  This month Vueling will introduce two new international bases, Amsterdam and Toulouse, which will further contribute to the international growth strategy of the airline. www.vueling.com