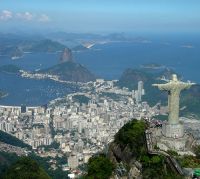 AERBT seemingly every week in recent times has reported on new airline and route expansion in South America, and in particular Brazil.  Today’s edition is no exception with news of further developments for Rio de Janeiro.

TAM, the leading Brazilian airline, is to gain more long haul frequencies in May and August.  The carrier will offer a daily service to-and-from Frankfurt as of 2 May, and increase the current four weekly services to New York to six.  The airline plans to increase the number of flights between Rio de Janeiro and London from three to six weekly departures as of 1 August this year.  TAM already offers a daily service to São Paulo from Heathrow.

With this schedule expansion the airline is taking delivery of a further two Airbus A330 aircraft.  The first will be delivered in April and the other in May.  The company currently has a fleet of 152 planes. www.tam.com.br