New York to London – The world’s most popular intercontinental route 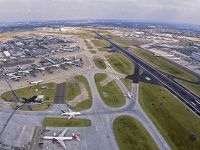 Heathrow may not be the world’s favourite airport in some respects, but it continues to lead from the front in terms of international airline routes.

Figures issue by BAA, the airport owner, note that 3.6m passengers departed to New York in 2010, giving a comfortable lead over mainland continental gateways in terms of popular transcontinental services.  It claims to be making real progress in reducing security times to under five minutes 99% of the time and last month’s average time for returning bags fell to just 30 minutes from the last one being unloaded off the plane.

March saw an average of one departure an hour during the day and one every 15 minutes during peak evening hours.

Six major airlines operate flights to New York every day from London – American Airlines, British Airways, Continental and United Airlines (now merged), Delta, Kuwait Airlines and Virgin Atlantic.  In July 2010 alone, a total of 779 planes left Heathrow for New York (both Newark and JFK airports). The average capacity of the departing plane was 257 and an average 241 people were on board.  That means that each flight was a staggering 94% full – unparalleled on any other route. www.baa.com