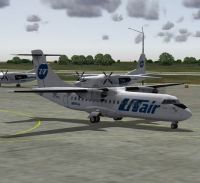 Business travellers in Russia and the Ukraine will in the future find themselves flying on the Italian/French ATR aircraft.

Russian carrier UTair has signed a contract for 20 of the Toulouse assembled aircraft bring its fleet up to a total of 37, the largest in Europe.

UTair was founded in 1997 with the partial breakup of Aeroflot.  Today it is one of the largest Russian regional airlines with a current fleet of 177 aircraft and an order backlog that not only includes the ATRs, but also 24 of the Sukhoi Super Jet.  As it retires its elderly Russian aircraft these are being replaced on longer routes by Boeing 737 New Generation series aircraft.

The delivery of these new aircraft will bring to more than 50 the number of ATRs operated by Russian, Ukrainian and other CIS countries’ carriers. www.atraircraft.com www.utair.ru/en