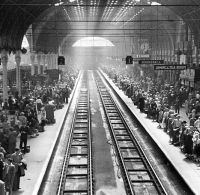 Regular Heathrow Express and Heathrow Connect users might be forgiven for blinking when they arrive at London’s Paddington Station.  The station is definitely brighter.

Coming to an end is a £35m renovation which started in 2009, and with the removal of the scaffolding there is now light on the platforms.  The built in 1916 the roof above platforms 9 to 12 has in fact been obscured since 1997.

Much of the current mainline station dates from 1854, and was designed by Isambard Kingdom Brunel.  The site was first served by Underground trains in 1863, and was the original western terminus of the Metropolitan Railway, the world's first underground railway.

Paddington is also part of the Crossrail project ?which is now well under way and will be of real value for Heathrow passengers when completed in 2016. www.networkrail.co.uk