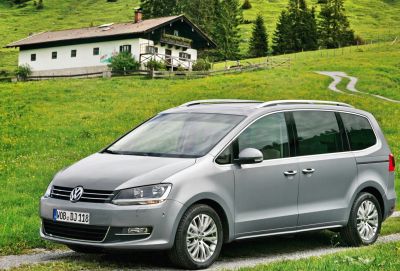 Just when Crossover vehicles seemed to be grabbing all the attention Volkswagen has come up trumps with a most sensible product.  I feel it is stylish without any suggestion of being cumbersome.  It is a sensible package.

The Sharan’s technology is based on Volkswagen’s highly acclaimed Bluemotion efficiency technology and currently for the UK market there is a choice of two petrol and two diesel engines, the less potent being partnered by a well ratioed, easy changing 6-speed gearbox as standard with the top 198 bhp 2.0-litre petrol version equipped with the selectable DSG automatic transmission.  The latter unit can also be specified as a cost-extra option of some other versions.

Initially the most obvious change over the previous Sharan which shared its DNA with the Ford Galaxy and SEAT Alhambra, is the provision of easy operating sliding rear doors that makes for an easier life in tight car parks, more safety when unloading younger occupants and relatively easy access to both rear rows of seats.

My first encounter with this new Sharan certainly raised my eye-brows when I realised it was powered by a mere 1.4-litre engine, an engine size that not so many years ago would not pull the skin off the proverbial rice pudding, let alone provide sufficient urge for a car loaded up with seven people and accompanying luggage!

Here is a clear demonstration of how far engine technology has advanced in the face of seriously challenging environmental and economic challenges.

No kidding, this turbo-charged petrol engine pushes out 150ps (148 bhp) in an amazingly civilised and flexible manner, endowing the Sharan with a claimed top speed of 122 mph (where the law permits, VW hastens to add) and with an acceleration time to 62 mph (100 kph) from rest in a commendable 10.7 seconds – slightly quickly if the DSG transmission is fitted.  Notably, power delivery is smooth, flexible, lively and without the surge factor common with some earlier turbo-charged petrol engines.

Work a small engine hard and it gets thirsty.  Well, that used to be the case but not with this amazing engine, the official combined consumption figure is a sensible 37.2 mpg.  Clearly load it up, work it hard and that figure should obviously decline but the fact is that a lot of the time the normal use would be less demanding and that is where the economy gain is very important.

In developing the Sharan, Volkswagen has optimised the ‘Purpose’ part of the vehicle’s designation to a major degree.  The rear seating arrangement is based on three individual seats in the middle row, and a pair of generously proportioned seats at the very rear.  Importantly there is a slide facility for the three middle seats thus enabling leg space to be apportioned as occupant demand dictates plus there is a good size foot well depth for the two rear seats thus enabling at least moderately proportioned adults to travel in relative comfort.

Luggage capacity is also an object lesson for most rivals.  With all seven seats in use there is a useful 300 litres of load space and with all seats flat folded (an easy task) there is a massive 2,297 litres and obviously other seat/load permutations.

Another major advance is the ride and handling qualities of the new Sharan.  Some MPVs tend to float when driven with a light load, not so the Sharan, the suspension is a successful combination of firm ride but with good bump insulation that is generally not affected by varying loads.   Steering response is positive through a nicely balanced steering wheel action, the brakes progressive rather than sharp and the six speed gearbox light and positive in operation. Straight line stability is also a strong point.
The driver’s lot is also a good one with easy access (there are grab handles above all the doors to help access, the generous range of seat and steering wheel adjustment ensures a bespoke fit for all shapes and sizes of operative. The all round vision is very good and importantly the fascia presentation is uncompromisingly benchmark Volkswagen which means clear no-nonsense instrument and easy switch gear that is housed in a stylish and well finished fascia.  Don’t be fazed by the electronic parking brake, it soon inspires confidence.

The new Sharan makes a very strong case for those looking for an MPV that has clear cut driving character and so many other qualities.  A lot of rivals seriously need to play catch-up!

There’s no better way for a car manufacturer to launch a refreshed brand image than by introducing a new class of model, one perhaps it has not previously offered in the past.

This is no cosmetic exercise based on a main stream model though there is a lot of the excellent drive quality pedigree of the impressive range that has been proving sales winners for Peugeot.  The RCZ is a stand alone special car that has plenty of spice, plenty of zest yet a certain coolness about its presence.

This is a coupe, though the slightly dishing crease of the central roof panel suggests a folding top which might add more fun but perhaps would confuse the issue with the admirable 207 and 308 CC models. The rear seat accommodation is a token offering

Accessing the front seats is more of a slide in operation and seat comfort (enhanced by a heated system on the test car) is a ‘fit like a glove’ experience that not cramped but supportive in all the right places to ensure that the performance can be enjoyed while the driver and front seat passenger are well secured to cope with the acceleration and cornering forces that could be experienced under really discerning driving.

The cockpit presentation is no let down, there are drilled metal pedals, conventional clear faced circular instrumentation, honest to goodness fumble free minor controls and switchgear with the overall effect emphasised by the high quality trim materials and excellent build quality that Peugeot has established across it latest model line-up.

The engine is a gem, smooth, potent with also a satisfying engine note, plenty of rapid pick-up and notable urge under acceleration.  Peugeot claim a top speed of 133 mph with 62 mph (100 kph) reached from rest in a creditable 8.3 seconds while a combined fuel consumption figure of 42.1 mpg suggests to me a good score on an index of performance rating.

I am not surprised that Peugeot has come up with this iconic product as the company has been successfully demonstrating a range of attractive yet individualistic products and I suspect the RCZ is just the kick-start of an exciting era for Peugeot. 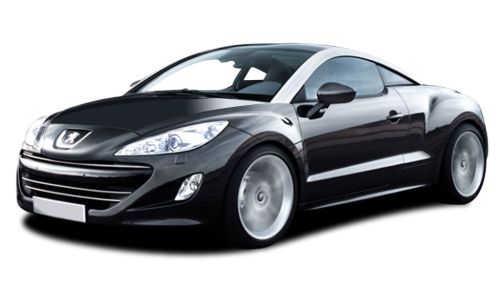