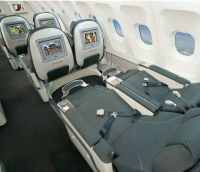 26 May has been set by Virgin Blue, Australia’s second largest airline, for the introduction of a full two-class wide-bodied operation on its domestic services.

The airline will shortly take delivery of the first of four Airbus A330 aircraft that will be used on the five-hour sector between Perth and Sydney featuring a 27-seat dedicated 2+3+2 Business Class with a fully reclining seat offing 62 inches of pitch.  The airline’s “The Lounge” pay as you go facility is part of the Business Class product.  Passengers throughout the aircraft will be offered the latest IFE (in-flight entertainment) system with films, TV and audio.  The airline's 737s and Embraers operate with Economy and Premium Economy to differentiate with the superior A330.  Virgin Blue competes against Qantas with Boeing 767s.